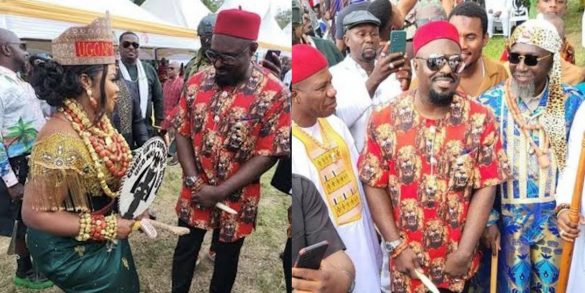 Jim Iyke, a Nigerian actor, has received a chieftaincy title in Accra, Ghana.

Her Royal Highness, the Eze Ndigbo Ghana, Dr. Chukwudi Ihenetu, bestowed upon Jim Iyke the title of “Ohadike 1 of Ndigbo.”

On the occasion of the 10th Yam Festival, the actor received the chieftaincy title.

The actor was honored for his outstanding accomplishments and contributions to the African entertainment sector and the Igbo people, according to HRH Dr. Chuwudi J Ihenetu.

Gossipinfo news recall that Nigerian actor has spoken out on his alleged conversion from Christain to Islam.

Hot Post:  Nigerians congratulate Lucy as she spends millions on a new car.

He affirmed that despite loving all religions, he would forever remain a Christian.

A Twitter user had earlier stated that he heard that the veteran had reverted to the Islamic religion.

While congratulating him, he said, “”I heard that the popular Nollywood actor Jim Iyke has revert to Islam. Alhamdulillah! Welcome to Islam, religion of peace. We welcome you wholeheartedly”.

Hours after the news went viral, Jim Iyke has taken to his Instagram to debunk the news.

Referring to the reports as a “aimless rumours”, Jim Iyke revealed that the pictures making the rounds of him in Muslim attire was from a movie he shot in Ghana.

He affirmed that despite loving all religions, he would forever remain a Christian.

“I felt it is necessary to address the elephant in the room that has been making the rounds lately. Usually, I don’t pay attention to this aimless rumours because they aren’t my cup of tea but certain lines shouldn’t be crossed. I made a movie in Ghana called ” Zanku boys” which would be out in July. The movie is about religious fanatics, someone took the pictures and it ended up with random bloggers who said I have converted. I respect all religion but I have no intention to convert my faith”.