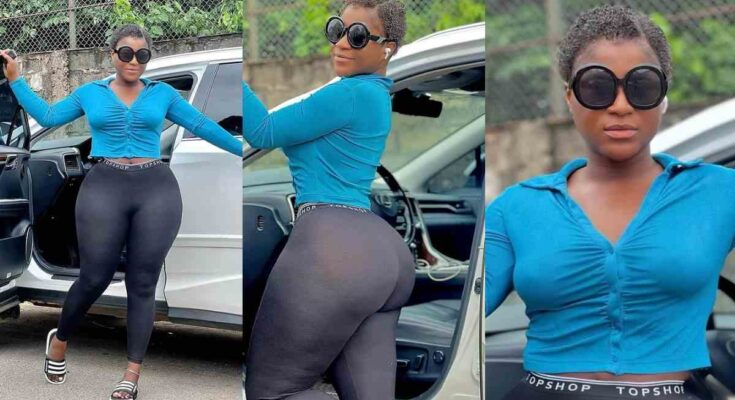 Destiny Etiko, Nigerian actress, has stir reactions online following some pictures of herself she recently shared, claiming she has a lot of ‘meat’ in her body.

Taking to her Instagram page, the actress humorously claimed that she has a lot of ‘meat’ in her body and she is open to sharing some with people.

Destiny Etiko steps out in a light blue crop top alongside a black legging that gave a good view of her backside.

Hot Post:  Nollywood Actress Destiny Etiko over the moon as Zubby Michael surprises her in grand style ahead of her birthday (Video)

In a recent news Famous actress Destiny Etiko recently shared some images of a man named Wisdom who got her face tattooed on his arm and printed on his top on her official social media account. In addition, Wisdom was sporting a blouse that featured her face.

When he travelled all the way from Port Harcourt to visit her when she was making a movie, Destiny finally had the chance to speak with the guy. Destiny experienced beautiful moments with him in addition to capturing them on camera.

In the video, she can be seen praising the tattoo that is on his back before telling him to turn around. Destiny is completely blown away by the amount of love that the fan demonstrated for her by tattooing her face all over his body

The video has generated responses on the internet, with admiration coming from both fans and celebrities. In addition to that, as they admired her, they complimented her wonderfully.

Emojis expressing love have been sent by notable celebrities such as Monica Friday and Juliet Njemanze.