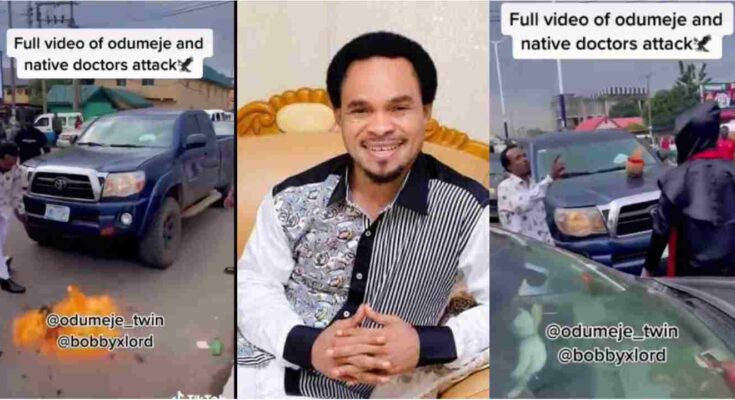 Rita Edochie, a well-known Nollywood actress, caused a stir on social media when she posted a humorous video to Instagram.

In the video, Pastor Odumeje was seen arguing with a group of native doctors who had stopped his car on the road in broad daylight.

The woman in the film pointed out that the man of God in the video is not Odumeje but his lookalike and severely criticised him.

Nigerians have reacted to the video in a variety of ways, with many of them criticising the actress for disparaging the individuals in the film.

Hot Post:  I Pray My Baby Comes Tomorrow – Dancer Korra Obidi Says As She Shows Off Her Birth Tub on Instagram (Video)

Social media users’ reactions to a video showing Pastor Odumeje, a well-known man of God, and several traditional worshippers arguing in the open have been conflicted.

The man of God challenged the native doctors in the video Rita Edochie uploaded to eliminate the charms they had pinned to the bonet of his car.

The automobile wouldn’t move after the fascinating display, so they tried to fix it. Rita pointed out that the guy portraying the man of God name in the video is not Pastor Odumeje, but rather someone who resembles him.

Hot Post:  Your absence pushes me back into my shell’ Actress Kemi Afolabi distraught as her daughter returns to school

She severely lambasted them with unprintable language.

____Ovie01: “You are an actress dose it mean the roles you played in moves are also misleading? As an actress you don’t use this words to pass messages. Really they were on the positive side of your man of God and they passed a powerful message.”

Hot Post:  i act ‘bad boy’ in movies, but have never cheated on my wife – Actor, Majid Michel says

Ummisufia: “My God help us all and lead us to the right path. This is staged joor. I experienced one in a church near by, had to entered to witness what was actually happening there.”

Twinz_cj: “I was able to narrate the end of the movie before watching it finish.”