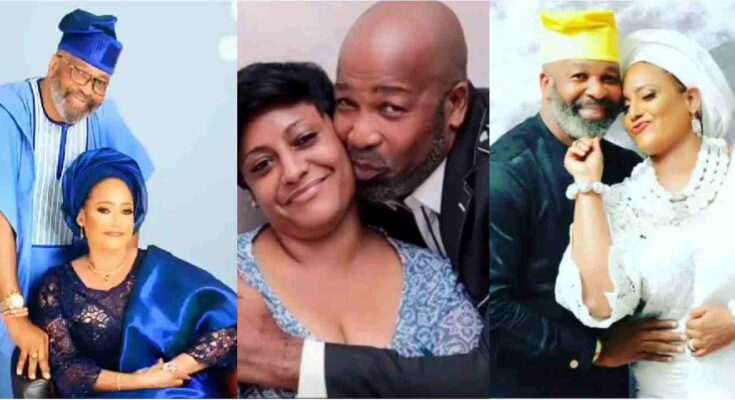 One of a loving couple’s goals should be to get married and spend the rest of their lives together, but this is not always the case. Given how frequently individuals divorce these days, it is crucial to honour couples who have been together for a long time.

Yemi Solade, a 62-year-old professional actor, met Hannah Marsh Solade while filming Wale Adenuga’s “Super Story.” After he divorced his first wife, they were married in September 2006. The couple has been together for 16 years and is now parents to Rola and Femi Solade.

Hot Post:  “I’m a married man and I don’t do gays” – Mompha reacts to allegations he dated Bobrisky

Yemi praised Hannah on his Instagram page, saying she is the reason he understands love better. He spoke about his love for Hannah and vowed to never stop. He concluded by expressing that she inspires him to become a better person.

To commemorate the day, Hannah responded to the post with several love emoticons and shared a picture of them on her Instagram story. I wish them a happy anniversary.

Hot Post:  [email protected] are coming after us because of the fake life we flaunt on social media, let be real- Nollywood Actor Solade blast colleagues

Gossipinfo Recalled That Veteran actor Yemi Solade has tagged himself as the most handsome veteran actor in the movie industry.

Yemi Solade stated this as he shared a screenshot photo of himself in a movie titled “THE RAZZ GUY” with the caption:

Hot Post:  “Daniella Is Doing Too Much For Someone In A Respected Relationship “- Diana Condemns Daniella’s Closeness & Dance Moves With Dotun (VIDEO)