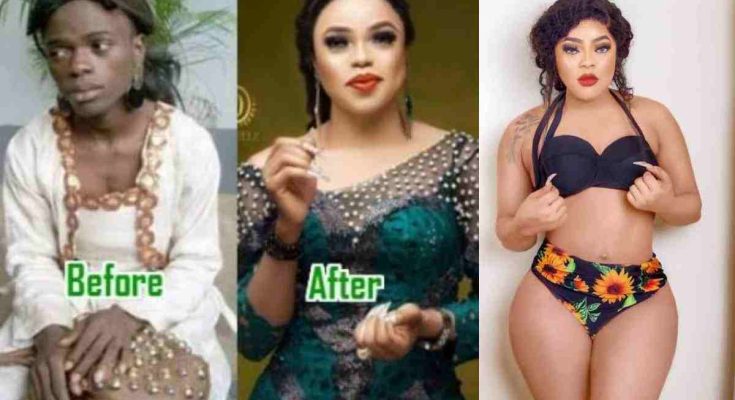 The infamous crossdresser Bobrisky, who works as a tweaker on the side, has written a post of gratitude to his unidentified partner.

Bobrisky, who recently made headlines for his tweet about wanting a house like Kylie Jenner’s, used Snapchat to publicly thank the unidentified man who was hiding his smile.

He claims that the unidentified woman is a modest billionaire who has chosen to date him (Bobrisky and spoil him with wealth).

He wrote: “I want to publicly thank my man. Without you baby I’m nobody infact am useless. You stand up for me behind d scene whenever anyone want to try shit with me. Everyday i keep praying for God to multiply your years on earth.

“A humble billionaire dat has pity on me and decided to spoil me with wealth. Many people want to know who’s dis man behind d scene who has been giving me strong back bone in dis country sad they can’t cos even at gun point nobody will hear your name.

“I love you yesterday, today, tomorrow and forever. My next life i want a sugar daddy like you”.

Hot Post:  I Love S3x, He Showed Me The Way – Bobrisky’s Former PA Opens Up On Being A Po*n Star; About Bob(Photos)

Bobrisky reveals his desire to have Kylie Jenner type of mansion

According to the news, Bobrisky revealed his intention on social media.

The self-described male Barbie announced on his Snapchat account that he is looking to spend 650 million Naira on a duplicate of American celebrity Kylie Jenner’s home.

In addition, Bobrisky revealed that after showing his lover the bill for the mansion of their dreams, the other person chose to end the relationship. Bobrisky boasted that he is finally prepared to humiliate Lekki girls.

He wrote: “I’m looking for about 650,000,000 like dis. My head is hot. I’m copying everything in Kylie Jenner new Mansio in my new home in pinnock. God help me. To get everything in Kylie home it will cost me over 120million. When i gave my boyfriend d bills he said babe I’m out.