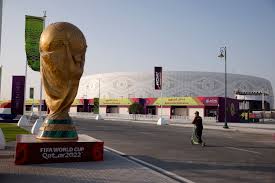 On Sunday, the FIFA World Cup begins with hosts Qatar taking on Ecuador.

Just two days before the World Cup begins, Qatar has prohibited alcohol from its stadiums. Due to Budweiser’s sponsorship of FIFA, it would have been the only alcoholic beverage available to fans. However, this will no longer be the case.

Asserting the decision, FIFA said in a statement issued on Friday: “Following discussions between host country authorities and FIFA, a decision has been made to concentrate the sale of alcoholic beverages on the FIFA Fan Festival, other fan destinations, and licensed venues, removing beer sales points from Qatar’s FIFA World Cup 2022 stadium perimeters.

Hot Post:  Ancelotti discusses the adjustments he made from the previous year that helped Madrid defeat Barcelona.

Authorities in the host nation and FIFA will continue to make sure that all spectators have a good time, are treated with respect, and enjoy themselves when visiting the stadiums and their surroundings.

“The FIFA World Cup Qatar 2022 organizers appreciate AB InBev’s understanding and ongoing support to our joint commitment to cater to everyone,” they said.

All World Cup venues will continue to sell Bud Zero without alcohol. It is known that the hosts, Qatar, are worried about how alcohol sales may affect spectators from other Middle Eastern and Asian countries as well as Qataris whose culture does not support drinking.

Only corporate spectators will henceforth be permitted to consume alcohol inside stadium boundaries. Alcohol will still be permitted for fans to consume in designated fan zones, but the event calls into question how much FIFA has control over the competition.

Since Budweiser reportedly pays FIFA $75 million (about £62.86 million) every four years to be one of its top partners, the move is certain to anger the corporation. Well, this is embarrassing, the beer company’s main account tweeted in a now-deleted message.

The decision was made too late, and the Football Supporters’ Association criticized the event organizers for their “total lack of communication.”

“Supporters will have understandable concerns about whether they will fulfill other pledges relating to accommodations, transportation, or cultural challenges if they can change their minds about this at any time, without explanation.”