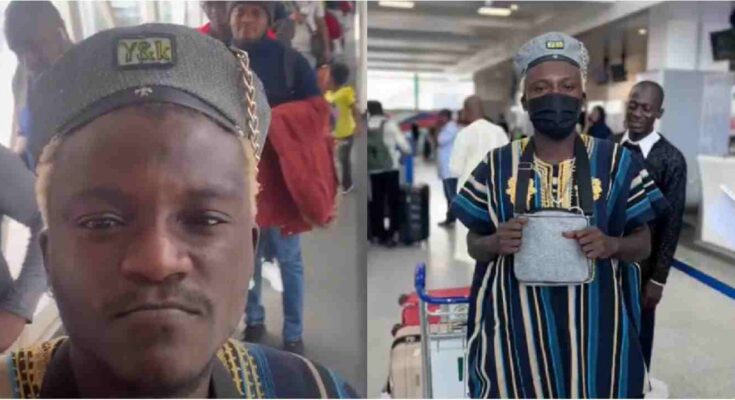 Portable Omolalomi, a well-known singer and performer, posted a nice video of himself at a Lagos international airport as he started his African Tour on his official social media account.

He was seen in the video displaying his foreign passport as he boarded a flight to Cairo, Egypt. He will perform in Cairo on September 23, which is tomorrow, and Accra, Ghana, on September 25, which is Sunday.

Hot Post:  “Give me 5 years and I’ll be bigger than all my colleagues, they all live fake lives” – Singer Portable declares (Video)

At the moment, Portable is one of the most sought-after musicians. His involvement in a number of issues since the start of his musical career has raised his profile on social media.

Aside from his debut success song with Olamide, he has continuously performed at gigs across Africa, North America, and Europe and recorded a number of smash jams back to back.

Gossipinfo Recalled That Habeeb Okikiola, also known as Portable, a contentious singer, responded jubilantly when David Adeleke, aka Davido, commented on a recent post he posted.

Remember that the two musicians had a falling out during the Osun governor’s race. While Davido supported his uncle Ademola Adeleke, who ultimately won the election, under the Peoples Democratic Party (PDP), Portable switched to the All Progressive Congress, APC.

Hot Post:  ‘It’s understandable if you sleep around for financial gains’ – Chioma Ifemeludike

According to rumours, Portable insulted Davido, which led the singer to stop following him on Instagram. However, the Ogun Monarch pushed him to apologise to Davido during the ceremony in which Portable was given a chieftaincy title, and he did.