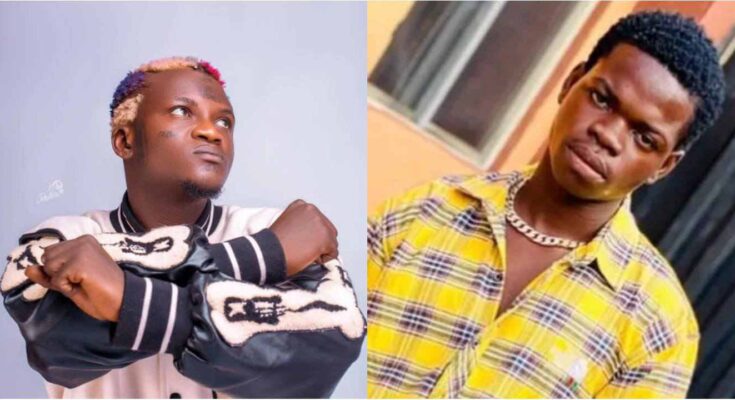 The artiste, Manny Monie, signed to Portable’s Zeh Nation record label, has spoken after he was assaulted and insulted by the latter.

In a video trending online on Friday, Portable accused Manny Monie of being ungrateful and said he employed two music distributors without his (Portable) knowledge.

Hours after the video went viral on social media, Manny Monie, shared a video via his Instagram account explaining what happened.

Hot Post:  Hilarious Reactions As Cute Abiola hides as Portable blow hot, threatens to use ‘juju ring’ on him

In Pidgin English, he said, “I no know wetin I do am, he just dey tell me sey I dey ungrateful. My brother bought me studio set. I was the one that own the studio (set) that Portable is using. He said he had a dream that some people wants to kill him that we should give him space and I said that I should carry my studio (set) to use till he call us back and he refused that he wants to use the studio (set) to replace the help he did for me. He seized my phone since morning.”

Portable Beat His Signing Manny Monie For Being Ungrateful

Gossipinfo Recalled That Habeeb Okikiola, also known as Portable, a well-known street-hop artist, has accused Manny Monie of “Zeh Nation” of being unappreciative of his signing.

The Zazuu star attacked a signee in a video that was posted to his social media platforms.

Portable was seen berating Manny Monie for allegedly trying to double cross him by hiring two music distributors without his knowledge.

Hot Post:  My father is not rich, I made my family rich – Singer Portable throws shade at Davido