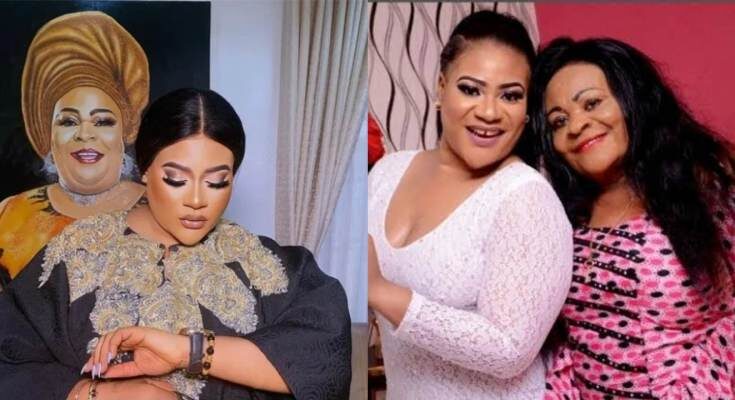 A year after her passing, Nkechi Blessing, a well-known Nollywood actress, has remembered her mother, Mrs. Gloria Sunday, by posting photos of her on social media.

The actress wrote, “Exactly one year today, I promise never to give up mummy, Till we part no more, forever in my heart,” beside a photo of her late mother on her official Instagram page. Many people had strong emotions online, and many of her supporters and coworkers visited her page to comfort her. Others assured her that everything would be alright while others prayed for the soul of her mother to rest in peace.

Hot Post:  "You Have Fulfilled My Heart Desires For Years" Nkechi Blessing rejoices as “anonymous fan”, who placed her on 1million allowance, bought her a brand new car

Recall that her mother died last year and was buried same year, we pray that her soul rest in peace, Amen. Nkechi Blessing is doing well for herself in the movie industry, she is currently making waves in the entertainment industry

Gossipinfo news recall that Nkechi Sunday Blessing, a well-known Nollywood actress, producer, brand ambassador, social media influencer, and businesswoman, has drawn attention on social media after posting stunning images of herself within a building compound on her official Instagram profile. She announced that she was in Ekiti State at the time. Honored Opeyemi Falegan David, the ex-boyfriend of Nkechi Blessing, is a well-known politician from Ado-Ekiti, Ekiti State, in Nigeria. When they were dating, they both made numerous trips to Ado-ekiti.

Hot Post:  I Thank God For Bring You Into My Life – Femi Adebayo Gushes Over His Wife

“Hello From EKITI,” she captioned the stunning images that she posted on her own Instagram page.

View the stunning images of Nkechi Blessing within a stunning structure at Ado-Ekiti. Approximately ten minutes ago, she shared the images on Instagram.