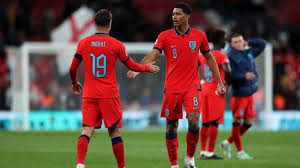 Jude Bellingham and Mason Mount have been linked with moves to Liverpool as Jurgen Klopp attempts to rebuild his midfield, but their performance has cast doubt on any future deals.

Prior to the World Cup, Jude Bellingham of Borussia Dortmund and Mason Mount of Chelsea were both pictured.

Newcastle United and their other top-four opponents may foil Liverpool’s ambitious transfer intentions for England’s Jude Bellingham and Mason Mount. Due to the Reds’ lackluster start to the season, Jurgen Klopp is reportedly looking to add to his midfield.

Despite having a game in hand, Liverpool is eight points behind third-place Newcastle in the Premier League standings as of right now.

Hot Post:  “El Clasico is not Thug of war” - Ancelotti

The race for a spot in the Champions League for next season has already heated up, and Klopp has already acknowledged that his team’s early inconsistency could hurt their chances of finishing in the top four.

According to reports, Liverpool is preparing potential summer transfers for both Bellingham and Mount, the latter of whom has not yet agreed to a new contract at Chelsea. According to the Daily Express, both deals could, however, be contingent on the FA Cup and Carabao Cup holders achieving a top-four finish. Newcastle is currently on track to occupy one of those spots this season.

Hot Post:  Champions League round of 16 Potential opponents for Liverpool and Tottenham

Bellingham, who is now anticipated to be a crucial player for England at the World Cup following a spectacular start to the season with Borussia Dortmund, has long been linked to Klopp.

After Bundesliga club CEO Hans-Joachim Watzke revealed the 19-year-old would be free to go should his asking price be fulfilled, a summer transfer to the Premier League may be in the works.

Hot Post:  The highest-paid footballer in the 2022 Fifa World Cup

In recent weeks, Mount has become an unexpected link, as the Blues playmaker has yet to agree to fresh terms despite protracted contract negotiations at Stamford Bridge. If a deal cannot be made, Juventus, Manchester City, and Liverpool have all been mentioned as possible candidates.

Liverpool might experience a setback in its attempts to sign both England internationals if Champions League football is not guaranteed. As of right now, Newcastle is proving to be a disruptor for the so-called “Big Six,” despite Eddie Howe’s quick dismissal of any talk of European football.