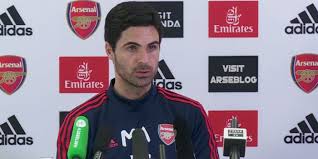 Mikel Arteta, the manager of Arsenal, has recently come in for more criticism for his propensity to leave the technical area during games.

“Short,” admits Mikel Arteta. Arsenal manager Mikel Arteta has recently come under fire for his touchline antics during games, in which he has strayed from his designated technical area on the side of the pitch. The Arsenal squad may be strengthened in January. The calls to action increased after the Spaniard was spotted on the sidelines of the London derby against Chelsea last week, far from the penalty area.

The Laws of the Game stipulate that anyone in the technical area must remain inside the designated area and conduct themselves appropriately.

All Premier League managers and coaches frequently break this rule, but Arteta has received the most flak for doing so.

The Arsenal manager was harshly criticized by beIN Sports broadcaster Richard Keys, who tweeted a photo of the Spaniard outside his locker room with the caption: “Why is this allowed every week @FA PGMOL? The entire game, Arteta has been bouncing up and down, completely outside of his technical zone. Fourth is watching as Potter is in his. Take action against this individual.

After that, he published a blog entry with the following request: “Someone please have a word with Mikel Arteta. He is currently the team’s coach who irritates me the most. If you can’t sit down, then stay in your own technical area. I say this because his shenanigans will eventually cause someone to suffer harm.”

Hot Post:  UEFA selects the goals for England and Germany by Chelsea teammates Havertz and Mason Mount as the UNL's top goals.

Former Premier League player Danny Murphy has backed up the charges, saying that punishment should be meted out to everyone involved, not just the Arsenal manager. He stated to TalkSPORT: “He and I both concur. But it’s not about Arteta; it’s about management in general. The laws are overly lenient, and penalties are seldom. If you exit it once, you should receive a yellow card; if you exit it twice, a red card. Done.

There’s a big box there, plenty of room for you to be enthusiastic, jump on your staff and your fellow colleagues, but the trouble is you’re always going to have those folks who say “we want to see the passion.”

“As soon as you permit the managers or coaches to begin stepping outside the box, whether it’s to rejoice, dispute, or coach, you’re only creating issues for yourself. When managers step outside of that box, they experience all the issues you see with them now on the sidelines.

The effectiveness of the calls to action remains to be seen, but they do increase the heat surrounding Arteta’s antics on the touchline.