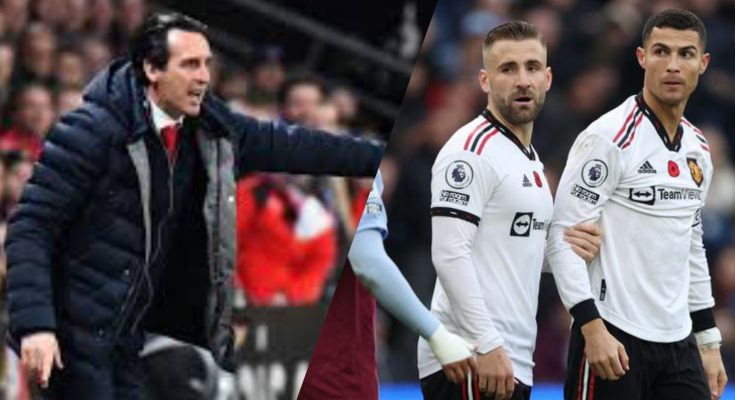 Here is the manager’s assessment after Aston Villa defeated Manchester United in a historic victory at Villa Park.

Unai Emery, the manager of Aston Villa, prior to the Manchester United match
Manchester United’s 27-year hoodoo at Villa Park was broken thanks to Unai Emery’s magnificent performance for Aston Villa. Since August 1995, Villa hadn’t defeated United at home in the league, but today, Emery’s team sprinted out of the gate to eventually defeat Erik ten Hag’s team.

Emi Buendia and Jacob Ramsey were placed off the Ollie Watkins and Leon Bailey front two pairing in the head coach’s 4-4-2 formation. At times, Leon Bailey was simply unplayable.

“We have energetic players. We have talented players, and we wanted to be unified and disciplined. The players followed our game plan while working together. It was a noteworthy day.

“Being consistent is my struggle here. Given that we haven’t beaten them here in a long time, today’s victory was crucial. The players depend on the enthusiastic backing of the crowd. Everything was perfect. We have only taken the first step, I will tell the players on Tuesday, while maintaining my composure despite my passion. We succeeded, but now we must maintain consistency.

Emery stated to BirminghamLive about his precise game plan: “We were speaking about the game plan and I think the guys did it wonderfully. It has to do with opposing them! I made an effort to maintain possession, counteract their aggressive pressing, and remove midfielders Buendia and Ramsey before attacking with Bailey and Watkins against their final line of defense.

“The players played according to their positions, and I wanted everyone to enjoy playing according to their personal traits. For me, the shape is not that significant. Manchester United allowed us to work in the areas where we sought to make use of those.

“We are aware of the players’ pace, rhythm, enthusiasm, and talent. The same is true for (John) McGinn and Danny Ings; they frequently play matches with the same philosophy, using guys who have the intensity and pace we desire, but today, I chose to use those players, and they were considering their play from the first minute to the final 90.