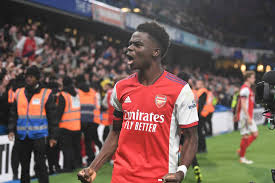 Arsenal news In the Gunners’ victory over Chelsea in the London derby, Bukayo Saka scored his tenth Premier League goal and made a four-word statement that Arsenal supporters will adore.

Saka’s effort helped Mikel Arteta’s team regain the top spot in the Premier League, giving him six assists for the year in addition to his four goals.

Since the start of the Premier League season, Arteta’s team has won 11 of its 13 games. With their sixth clean sheet, they have moved ahead of Manchester City and back to the top of the standings.

It was possible for those in attacking positions to express themselves despite Chelsea’s quick pressing because of the Gunners’ defensive unit’s compactness and composure. Gabriel Jesus, who frequently caused problems for the Blues defense by drifting out wide on the left, gave Martinelli free rein to roam.

Aside from being a persistent pain in Marc Cucurella’s side, Saka was also instrumental in the Arsenal goal. He sent in a corner that appeared to be underhit but actually traveled through a sea of bodies to Gabriel’s feet, where he poked the ball into the roof of the net. Saka’s presence at Chelsea has been disappointing.

Hot Post:  Lionel Messi is once again defeated as Cristiano Ronaldo is named the most marketable athlete - Report

After that, Arsenal played a very professional final 30 minutes, limiting Chelsea to few scoring opportunities while maintaining control of the ball and creating opportunities for themselves. Saka himself missed a goal after a cross fell at his feet.

Following the game, Saka posted a beautiful picture of the Arsenal team celebrating their goal on social media with the caption, “I love this team.” The picture perfectly framed him, Granit Xhaka, Martin Odegaard, Gabriel Jesus, and goal scorer Gabriel as they ran towards the opposing end.