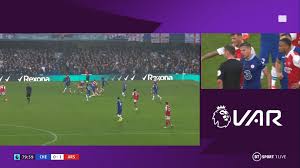 In their victory over Chelsea in the London derby, Arsenal felt that they should have been given a penalty after the ball touched Marc Cucurella’s arm on the edge of the penalty area.

Peter Walton, a former Premier League official, explains why Arsenal was not given a penalty in their 1-0 victory over Chelsea at Stamford Bridge.

After the ball was seen to have struck Marc Cucurella’s arm on the edge of the Blues’ penalty area, Mikel Arteta’s team felt they should have been given a spot-kick.

The Gunners held on to a crucial London derby victory and climbed back to the top of the Premier League when referee Michael Oliver permitted play to go after a protracted VAR review.

Walton said that the incident was a clear handball but supported the final VAR determination. He made a point of emphasizing “That’s a handball in my opinion” as part of BT Sport’s coverage.

The arm is taken out of the body. The crucial question is whether the handball is within the zone. The handball, in my opinion, actually occurs elsewhere.

Walton continued, “No, if your foot is on the line then it’s inside the area, if you’re making a foul. Jermaine Jenas asked if Cucurella’s foot being on the line meant he was outside the box.

A handball offense, however, occurs when the ball strikes an arm while the arm was outside the penalty area.