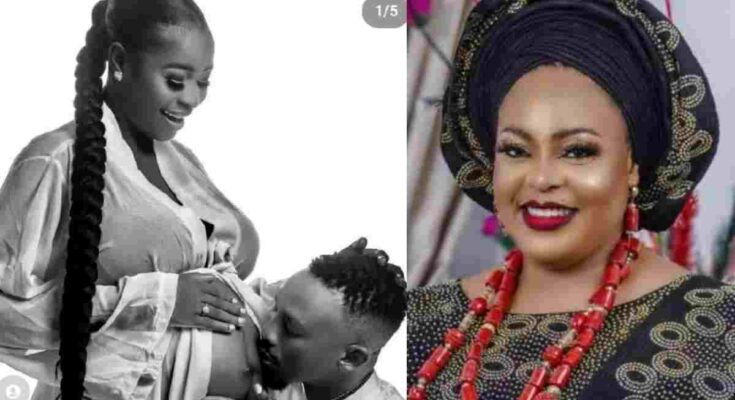 Sola Kosoko Abina, an actress in Nollywood, congratulated Sharafadeen Olabode, commonly known as Ayekooto, and his lovely wife on the birth of their new child. In the name of Jesus, she prayed that God would bless the newborn and his family.

Yoruba movie producer, director, screenwriter, brand ambassador, and influencer Sharafadeen Olabode entered the industry a few years ago and quickly rose to prominence as one of Nigeria’s top film producers. Ayekooto, Oyenusi, Aye tuntun, Ayelabowo, and Aiyensare are just a few of the interesting Yoruba movies Olabode has written, scripted, and produced. He has also written over 100 scripts for other producers.

Hot Post:  "I Can become a Stripper for you" Actress Kemi Taofeek say as she and her husband mark 2nd wedding anniversary

Some people referred to him as Ayekooro because of his popular movie he released about 10 years ago. He has also featured in several Yoruba movies and as well acted alongside top actors in the industry.

Nollywood actors such as Femi Adebayo, Seliat, and lovely fans took to the comments section to drop their congratulatory messages and lovely emojis.

I wish him and his beautiful wife a big congratulations on the arrival of their new baby.

Gossipinfo Recalled That Talented Nollywood Movie producer and Scriptwriter, Sharafadeen Olabode shared recent lovely photos of his Pregnant wife on Instagram page. Fans, family, friends, and Nollywood actors in the movie industry has congratulated him by sending their congratulatory messages on social media.

Sharafadeen Olabode is a Yoruba movie producer and scriptwriter, who joined the industry a couple of years ago and became the biggest movie producer in Nigeria. Olabode has produced a lot of interesting Yoruba movies. His acting career started in early 80s.