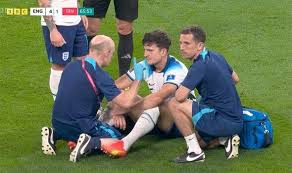 The Three Lions‘ next group stage match against the United States may be without Harry Maguire after his outstanding performance for England against Iran.

Despite numerous requests for Southgate to omit Harry Maguire from the starting XI, Maguire excelled in England’s back four. He may potentially miss England’s next group-stage match despite his performance, despite having played so little for Manchester United this year.

Maguire could be seen sitting on the ground after Mehdi Taremi of Iran scored to tie the score. Before Eric Dier took his place, the England medical staff examined the 29-year-old for concussions in accordance with regulations.

His exit may mean the end of his participation in the tournament’s group stages due to strict concussion protocols, similar to the situation faced by Iran goalkeeper Alireza Beiranvandmay after he was taken off in the first half with a suspected concussion, but it did not cost England a substitute due to new rules.

This keeps the clubs’ other permitted changes in place and prioritizes player safety in the rules.

Additionally, the opposition team, in this example, England, will be permitted to make an additional substitution. Since 2021, this has been the situation in the Premier League.

In addition, the FIFA website explains additional protocols they have implemented, saying that “for the first time at a FIFA World Cup, an independent Concussion Assessment and Rehabilitation Service will be offered in Qatar to provide an evidence-based assessment of any player who has suffered a brain injury, including recommendations from concussion experts regarding the player’s return to play.”

Given that concussion protocols call for a player to sit out for 10 days before being considered for a return to play, Beiranvand might not be able to compete in the World Cup if his team fails to advance past the group stage of the tournament.