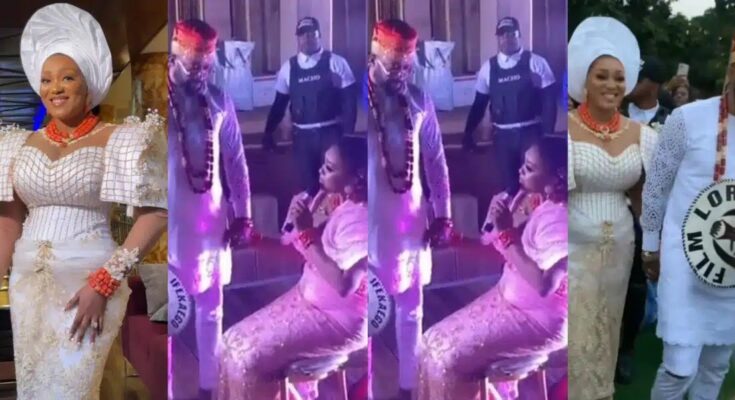 At her traditional wedding, Nollywood actress Peggy Ovire gave some advice to the ladies.

The recentlywed gave her gender advice to remain with their financially strapped boyfriends.

Peggy gave herself as an example, mentioning how she is happy she stuck by Frederick Leonard while he was broke.

She observed how many people had praised her for marrying Frederick without realizing that she had supported him during his darkest moments.

Frederick has been honoring his pledge to spoil Peggy, as stated by Peggy.

Frederick’s wife said she had faith in her husband’s future and would stand by him till things turned out nicely.

“When I see on the internet people say ‘Peggy you are lucky, but they don’t know what I have been through. I have stood by this man.

I have met a man who said Peggy I would take care of you be patient, he promised to spoil me and Frederick has been spoiling me.

I hope this goes to the internet, every girl should be patient. I have been patient”.

She also said, “When I met Frederick, he had a girlfriend, but then I looked at his future,I said that ‘This guy is going to make it’. And till tomorrow, Frederick asks me how did you know that I would get here? So to every young lady out there, if you have a guy that you like and he does not have money, please stay.

Pray for him, listen to him, encourage him. That is what I have done to him”.