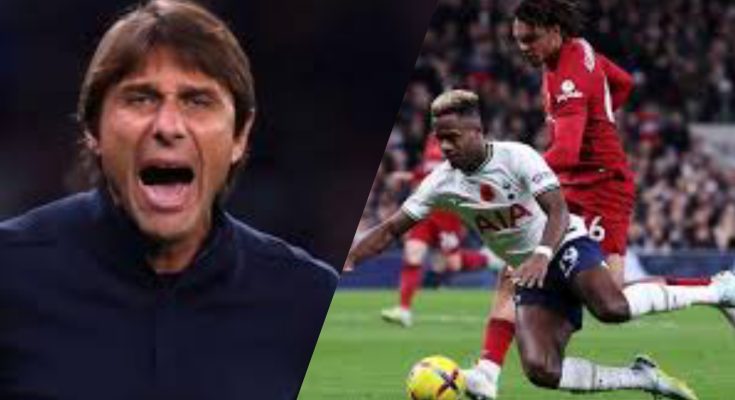 Trent Alexander-Arnold of Liverpool was called for a penalty after pushing Tottenham’s Ryan Sessegnon in the area.

In the first half of their Sunday Premier League match against Liverpool, Tottenham believed they should have been awarded a penalty for a shove by Trent Alexander-Arnold on Ryan Sessegnon.

At the Tottenham Hotspur Stadium, Liverpool took the lead through Mohamed Salah after just 11 minutes. However, shortly after Spurs hit the post, Antonio Conte’s team was frustrated when their appeals for a penalty kick were denied.

After 22 minutes, Alexander-Arnold appeared to bump Sessegnon in the penalty area in a move reminiscent of the one that led to Joao Cancelo of Manchester City giving up a penalty and receiving a red card against Fulham on Saturday.

Replays revealed that Sessegnon may have been searching for the collision, but Alexander-Arnold shoved him, so he can probably count his blessings that referee Andrew Madley ignored Spurs’ protestations.

Following a catastrophic error by Tottenham defender Eric Dier, Liverpool went up 2-0 thanks to Salah once again. VAR also decided against getting involved in this situation.

As a result, Tottenham has an uphill battle after yet another subpar first-half performance, with Liverpool likely to earn their first away Premier League victory of the year.