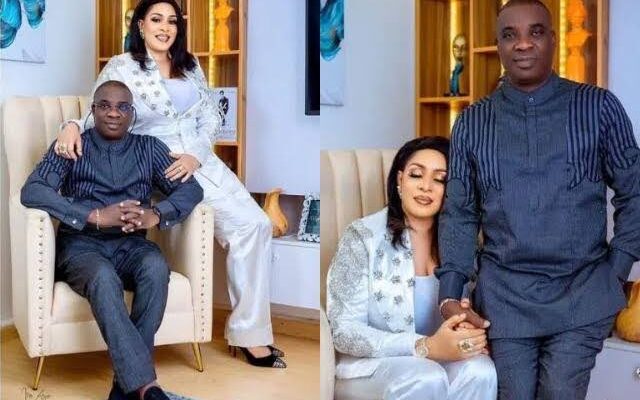 The legendary Fuji singer Kwam1 and his wife, Emmanuella Ropo, are celebrating their first wedding anniversary.

Recall that on this day last year, socialite Emmanuella and monarch King Wasiu Ayinde exchanged vows in a lavish ceremony.

Ever the romantic lover, Kwam wrote his wife a lovely note on the occasion of their first wedding anniversary.

He described how he and she first began their journey together and acknowledged that it had not been simple.

They will persevere in braving the storm together, though.

He prayed for them as he wished her a happy anniversary.

“A year ago, I announce the beginning of a new chapter in my love life, with the arrival of my Angel sent from heavenly father, to love, adore and cherish for the easy because of side takes, but we weather the storm by the special grace of God Almighty. May we continue to enjoy the blessings as dictate by God the more. Happy Wedding Anniversary to us AYAMI…..Itesi Oroki Omo Olukojiya, same you Ojanimogun ara ijamo, Omo Epo N Pon roro. Aya Omoba Fidipotemole Ojusagbola Ogoji”.

Months back, Emmanuella Ropo, had gotten many talking with her touching tribute and vow.

Emmanuella left many in awe of her sweet relationship with the singer despite numerous hearsay from critics and haters.

Taking to Instagram, Emmanuella shared a lovely photo of herself and her husband, Ayinde Marshall, accompanied by a heartwarming tribute.

Emmanuella revealed how the singer made her happy even when she least expected it, stating every day with him is beautiful.

She also made a strong vow to KWAM1, stating she would be with him until her very last day.

She wrote: Everyday is beautiful with you my man, you have this incredible way of making my heart happy, It’s so amazing when you come into my life, and I expect nothing out of it, yet suddenly, right in front of my eyes, is everything I ever needed. Until my very last day, I’ll be loving you”.