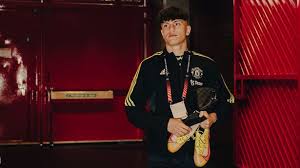 Alejandro Garnacho, a young player for Manchester United, is still not allowed to use the first-team dressing room at the team’s Carrington training facility.

Prior to scoring his first goal against Real Sociedad in the same competition, Garnacho made his senior debut against FC Sheriff in the Europa League last month.

As a second-half substitute, the 18-year-old had a significant impact on Thursday’s 4-2 victory over Aston Villa in the Carabao Cup by contributing two assists. In extra time, his second goal for Scott McTominay particularly stood out.

Although the winger has enjoyed a quick ascent to stardom, United manager Erik ten Hag wants him to remain grounded.

Garnacho still lacks a locker at Carrington’s first-team dressing room, according to the Daily Mail. The young international from Argentina joined United’s youth system in 2020 after leaving Atletico Madrid, and he has since made appearances for United’s U21 team.

Ten Hag had earlier asserted that Garnacho’s attitude was insufficient. He reportedly arrived two times late for practice during the preseason, which cut into his playing time.

Since then, there has been a discernible shift, which United midfielder Bruno Fernandes also mentioned earlier this month.

Ten Hag said Garnacho’s attitude will make or break his hopes of being a fixture in his team after United’s victory over Villa.

Hot Post:  "Always be Kind to your superior" - Ronaldo after receiving the award for scoring 700 club goals

Ten Hag remarked, “It was good that he came on and demonstrated that ability and had that impact in the game, to be able to assist, make the dribbles, and go behind.

“He still has a lot to learn, but it is clear that we are pleased with his progress and that he can benefit the team.

“It depends on his method and disposition. Yes, it is conceivable for him to play more if he continues to work.

“He strives for daily improvement. He needs to lead a morally upright life. He is capable of doing it.”

United’s attacking capabilities are now lacking. Jadon Sancho and Anthony have been absent from the last three and four matchday squads, respectively, while Cristiano Ronaldo missed midweek due to sickness.

In the Premier League standings, the Red Devils are currently ranked fifth. On Sunday afternoon, they play Fulham knowing that a win would put them three points behind Tottenham Hotspur heading into the World Cup.

United also have a game in hand on Spurs, who defeated Leeds United 4-3 on Saturday after coming from three goals behind.