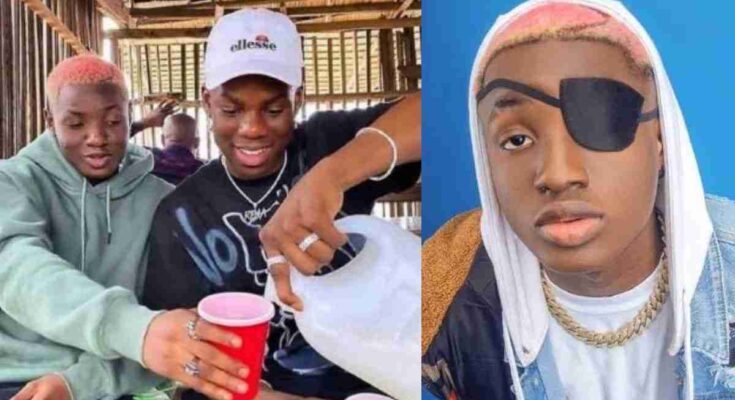 A picture of Michael Adebayo Olayinka, better known by his stage name Ruger, sans his eyepatch has got online users talking.

Many social media users have questioned whether the “Bounce” singer, who is well-known for his distinctive one-eyed appearance, genuinely has an eye ailment or whether it is just a matter of style.

Although the crooner once said in an interview that his distinctive eyepatch had something to do with music, netizens yearned to see for themselves.

In a recent development, a picture of Ruger and Rema at what appeared to be a neighborhood tavern as the latter attempted to pour some drink into the former’s cup made its way online. Ruger removed his eyepatch, allowing internet users to see his bare face for the first time.

Sharing the photo, a Twitter user identified as Abdulltwits wrote:

The photo generated several reactions from social media users who were wowed after getting a glimpse of the crooner’s face.

One luxe_by_steph wrote:
“He looks like a fine girl here 😍”

teeto__olayeni wrote:
“I think he has like a “quarter past one eye” dunno what it’s called in English”

officialsandib wrote:
“He should cover the eyes back abeg e no fine with the two eyes 😩”

l.tobiloba wrote:
“Yes, he has two eyes, albeit in an unbalanced ratio. That’s his signature.”