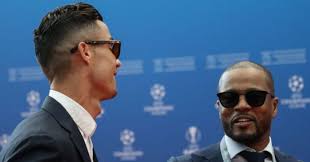 In response to Cristiano Ronaldo’s interview with Piers Morgan, former Manchester United defender Patrice Evra stated that “when you are hurt, you can make mistakes.”

The second and last installment of Ronaldo’s interview with Morgan aired on Thursday night, putting an end to his irrational charges. Even though there is now nothing further to be revealed, the harm has already been done.

The 37-year-old seems to have severed ties with United after criticizing Erik ten Hag, his former teammates, and the conduct of the current crop of young players.

Prior to the interview on Thursday night, he spoke with Betfair and said: “Although many people are criticizing Cristiano for his attitude at this very moment, it is important to remember that we are all only human. I’m not trying to defend anyone, but sometimes you can make mistakes when you’re hurt.

Hot Post:  Ansu Fati, a 19-year-old player who is dissatisfied with his lack of playing time, is reportedly considering leaving Barcelona in a surprise transfer.

“Cristiano Ronaldo will likely seize the opportunity to demonstrate why he is the best player in the world [in Qatar]. He was booed by his own fans at the previous game, so he will be extremely hurt.

Although he has already achieved success with his nation, I have no doubt that this tournament will hold special significance for him.

“He needs to consider the team, and I believe Portugal can shock some people. They have a fantastic group. Right now, they are dealing with a furious Cristiano Ronaldo. enraged for the victory, enraged for the goals, and enraged for proving to the world that he is the finest player in the world.

“I hope that won’t have an effect on the squad. Given everything going on at Manchester United, this may be his final World Cup, and I’m sure he can’t wait to get going. He’ll already be practicing and preparing in his mind.