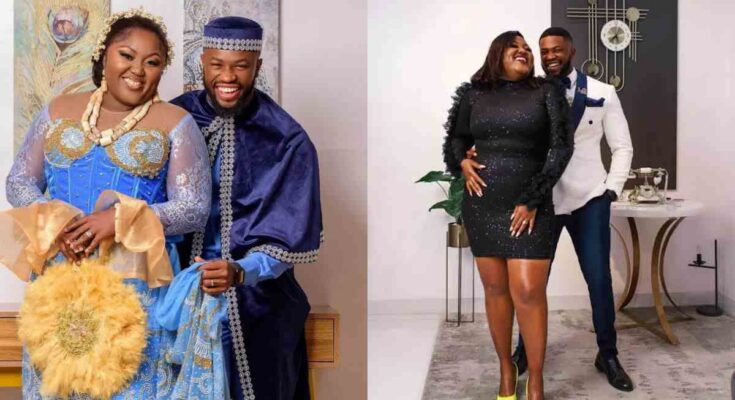 A new revelation on his marriage to Blessing Jessica Obasi, a colleague, has been made by well-known actor Stan Nze.

Recently, the actor and his wife celebrated their one anniversary, and Stan Nze has shared details of what happened on that particular day.

While their supporters believed that their day was happy and worth celebrating, the couple felt the reverse.

Stan Nze admitted that he and his wife had argued because they were in conflicting moods.

Hot Post:  “I love Daniella buy she is proving difficult because of Khalid”- Dotun report his problem, Deji advises him on what to do (VIDEO)

This was revealed by the actor during an interview with TVC’s Black Table. According to Stan, his older wife and he had a major falling out because they had fought and neither was willing to make concessions. As a result, even though it was their anniversary, the two had gone to church separately.

He appeared dissatisfied in the footage that went viral, Stan Nze observed.

Hot Post:  Why I Married My 42-Year-Old Wife With A 10-Year Age Difference – Actor Stan Nze Opens Up (Video)

He couldn’t seem to be happy while actually being unhappy with them.

His wife explained away his foul attitude as being emotional, and he felt bad knowing he couldn’t disclose what was really going on.

The times me and my wife have had like some fall out is because you know you dey vex, I dey vex, I no gree today.

On our anniversary day, we went to church without….we weren’t talking. We got to church and apparently we had a community of fans who came with money cakes, tray of foods outside yeh church. Me I was saying I am late, I wasn’t in the mood. She posted the video and I couldn’t fake it, I wasn’t happy. My wife pretended that I was emotional but the truth is we weren’t talking”.

Hot Post:  10 Single and wealthy Nollywood actresses you would want as a wife