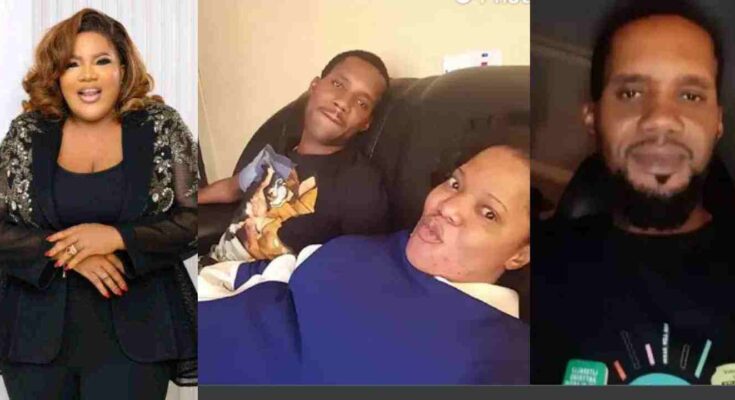 Seun Egbegbe, the ex-boyfriend of Toyin Abraham, a well-known Nollywood actress, warned journalists and media organizations in an interview not to keep bringing up the actress.

Seun Egbegbe stated during an appearance on the program “LagboOsere” that he won’t agree to an interview if he is asked such a topic.

After being repeatedly questioned by “LagboOsere” viewers about the reason for his and Toyin Abraham’s separation, Seun Egbegbe responded in this way.

Hot Post:  “My ex broke up after I lost my fingers but I’m happily married now” – Physically challenged lady rejoices

He was accused of scamming no fewer than 30 bureau de change operators in Lagos of various sums both in local and foreign currencies between 2015 and 2017.

In the interview, Seun Egbegbe advised Nigerians to move and respect the home of his ex-lover, Toyin Abraham who is now married and blessed with a child.

Seun Egbegbe, who is a filmmaker added that, Toyin Abraham husband, Kolawole Ajeyemi is so good to him as a person.

When the interview asked him if he will continue doing good to people, Seun Egbegbe who had earlier disclosed that 95% of those close to him, include those he assisted abandoned him while he was in detention said he will keep on doing good because he was really helped in prison by those he never met before in life as this always remind him of doing good to the worthy people. Watch the video below;