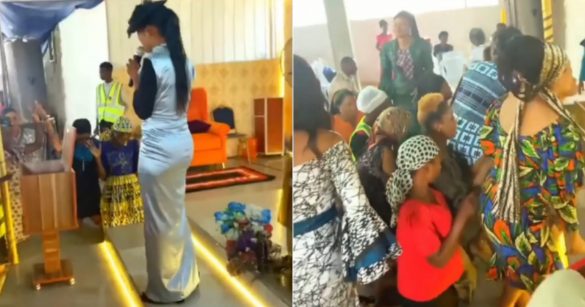 In a recent video, a female preacher was shown praying for women looking for husbands and requesting that they each bring 3,000 naira as a seed of faith.

She prayed for the women who were prostrate before the altar and requested that each of them bring 3,000 naira as a seed of faith.

This was quite funny to internet users, and they weren’t shy about sharing their opinions in the comments.

Some of the remarks state:

Hot Post:  ‘I will deal with your humiliators in a billion folds, ‘ Actress Lizzy Anjorin assures her baby as she shares beautiful family moments

Authorities became aware of the self-proclaimed Man of God’s activities when it was stated that his church serves as a labor room for expectant mothers.

Hot Post:  Bride surprised as pastor asked her to pledge her brests will be used to satisfy her husband at all times during wedding (video)

The pastor was also accused of engaging in other medically dubious behavior that has allegedly resulted in a large number of fatalities, such as selling the populace “bulletproof” water.

Abdulmumin Abubakar, the Special Adviser to the Chairman on Media & Publicity accused Michonza of engaging in “ungodly activities”.

The investigation became necessary after some of his alleged ungodly activities were published on social media by concerned members of the public.

“The council chairman appreciates people for blowing the whistle and exposing the alleged atrocities of Mr. Peter in the name of church activities, noting that details of the investigation will be made public in due course.”

The presiding pastor of “New Jerusalem church” located within Ageva axis of Okene, had earlier called for the release of disgraced singer, R.Kelly who was recently jailed over child pornography and rape.