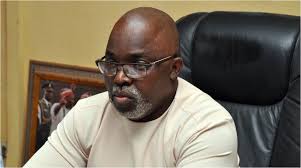 Amaju Pinnick’s eight years at the helm of the Nigeria Football Federation (NFF) will come to an end today when his board term expires.

The sports administrator from Delta State was chosen to serve as NFF President for the first time in 2014 after winning an election conducted in Asaba, the capital of Delta State. Later, when he was elected for a second term in 2018, he would become the first NFF president to do so, making history in the process.

However, the former chairman of the Delta State Football Association’s stewardship account has sparked conflicting reactions among those involved in the sport of football.

Hot Post:  UCL: Our best is not enough - Lewandowski reacts to Barca defeats to Bayern

Stakeholders counter that while Pinnick served as NFF president for eight years, Aminu Maigari served as president for four years during which time Nigeria won 13 trophies, including the crucial African Cup of Nations (AFCON). This includes the trophy Maigari prepared before he left office.

For the first time since 1974, Nigeria also failed to qualify for back-to-back AFCONs during his leadership.

The performance of the women’s national team was ineffective. The once-dominant African team’s performances began to rapidly deteriorate, and this year’s Women’s African Cup of Nations (WAFCON) in Morocco saw the team’s lowest performance in the competition’s history.

The decline in women’s football in Nigeria may be seen, among other things, in the Falcons’ inability to travel to the last two Olympic Games.

Pinnick has been charged with forsaking Nigeria’s domestic football organization in order to join CAF and FIFA. Many people think Pinnick just cared about his own personal growth, not the growth of Nigerian football.

Others agree that Pinnick’s NFF made significant strides toward securing rich sponsorship deals for the national teams, and they add that Pinnick represented Nigeria well on the world stage as an elective member of the CAF executive committee and FIFA Council.

The local leagues, particularly the Nigeria Professional Football League (NPFL), were essentially abandoned and reduced to a shell of their former glory for some, if not the majority of football fans in Nigeria. The days when Nigerian clubs were respected on the continent were long gone, and Pinnick turned the league’s administration into a farce. The nation has failed to earn a spot in consecutive African Nations Championships (CHAN).

Hot Post:  He started to be a burden - Dortmud's Ex-director on Selling Haaland

Whether you like him or not, Pinnick will be remembered as a very colorful, ambitious, and contentious character in the history of Nigerian football for his leadership of the NFF.

When Braga plays CA Ouriense on Sunday, Efih will be excited to make her Portuguese top-flight debut for the team.