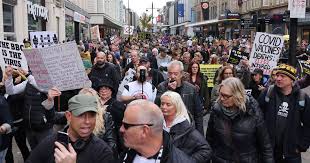 Before Newcastle United’s final Premier League game before the World Cup against Chelsea, the advocacy organization NUFC Against Sportswashing will stage a silent protest.

On October 17, 2021, a Newcastle United supporter wearing traditional Saudi attire and draped in the Saudi Arabian flag stands outside St James’ Park in protest of the club’s Saudi Arabian owners. This is in advance of the match against Tottenham. It is the first demonstration that NUFC Against Sportswashing, a campaign organization that has been gathering steam on social media, has organized in public.

On Saturday night, Eddie Howe’s team plays the Blues in their final Premier League matchup before the World Cup break. News that the Saudi regime had executed 81 people grabbed headlines following the rematch in March.

In their unexpected bid for a top-four spot, Newcastle will be hoping to open up a nine-point gap over Chelsea. Thousands will gather at St James’ Park to watch this match. However, a small group of devoted supporters will gather in front of the Sir Bobby Robson statue more than an hour before the game to stage a quiet protest against the Public Investment Fund’s continued participation.

The campaign group’s founder, John Hird, told ChronicleLive that there will be a focus on human rights because it was the final game before the World Cup. Additionally, it is a meaningful game for us because the Saudi dictatorship massacred 81 people prior to their match versus Chelsea last season.

“We believe it’s critical to shed light on what’s really happening and the characteristics of the club’s 80% owners. We don’t anticipate thousands, but even if it’s just a handful, we believe it’s an important milestone that must be set in order to spark discussion among fans.

It will be a respectful, silent protest. We won’t join in with any yelling, screaming, or singing in response.

Since their contentious acquisition last year, the Magpies have been the target of sportswashing accusations. The second warm-weather training camp for Howe’s team will take place in Saudi Arabia, and United’s third uniform has drawn criticism for emulating the official colors of that nation.

The 81 state-ordered deaths in the kingdom in March, the greatest mass execution in decades, were allegedly motivated by “deviant views.” Many of the alleged offenders were minors when they committed their alleged crimes.

Along with the silent demonstration, a banner with the names and images of young people presently serving death sentences will be displayed. For Hird, a genuine acknowledgement of the frequently highlighted human rights “problems” is long overdue.

He stated: “Issues is used as a sort of euphemism. What exactly do we discuss when we talk about issues? We’re discussing mass executions, the death penalty for juveniles, torture, and the detention of women for tweeting constructive criticism. We want to engage fans in conversation about the issues we’re addressing.”

Following Jurgen Klopp’s recent jab about Newcastle and Manchester City having “no ceiling,” state ownership in the top division has once again come to light. In order to prevent state ownership of the Magpies, the Premier League insists that they were given “legally enforceable assurances” before approving the takeover.

Added Hird: “It almost seems as though everyone agrees that this is just how football is and must be.

Hot Post:  We are both English and Nigerian – Tomori and Tammy Abraham talk about their ancestry

“Is this what we want for football’s future? Is it worthwhile if we have tons of money and become as successful as Manchester City in the future?

“They introduce their human rights politics into our society, and I don’t see a long-term future for it; it’s like an arms race. Our demonstration is not directed towards Newcastle supporters or even simply at Newcastle. It concerns football’s future.”

The protest’s plans have been discussed on social media for a fortnight, and unavoidably, a small number of “bots” and “trolls” have responded in a “hostile” manner. Hird feels that many people already have the same worries and does not anticipate any issues on the actual day.

The notion that all Newcastle supporters support Saudi ownership is untrue, he continued. There are a lot of fans that don’t like it, but they haven’t had an opportunity to express themselves or protest. I’m hoping this will be a chance.

“It’s not only about playing well and having a better squad. Wonderful, but at what cost? That is what we need to consider.