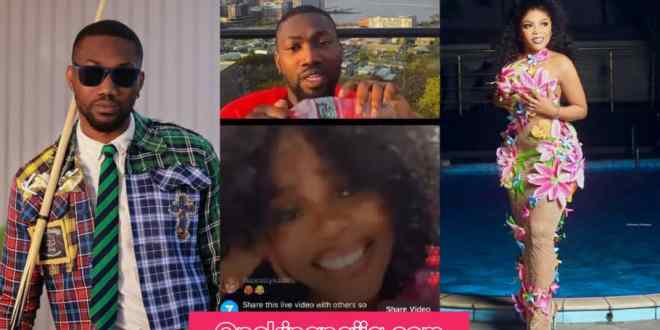 Fans of Chichi and Deji, Big Brother Naija stars, have responded to a recent live video session they both had yesterday on their Instagram profiles.

You may remember that Deji and Chichi were involved while filming the bbnaija program, but Deji appeared to be pressuring Chichi into a relationship.

While the show was airing, many at home believed that Deji didn’t truly love Chichi but was just acting as though he did.

Hot Post:  E don happen, she like to always be on top – Reactions as Deji and Chichi spotted as Duvet removed while they were doing the do [Video]

Deji’s behavior toward Chichi since the end of the performance gave the impression that she is pressuring them into a relationship.

In the live video session they had yesterday, Deji seems to be uninterested in having a conversation with Chichi, his facial expression speaks a lot, at a point he left her on the live session and later came back.

However, Chichi didn’t notice his actions or maybe she’s trying to cover up so as not to attracts reactions from their fans or shippers.

Chichi kept blushing, smiling and asking him questions about food, talks about money and a lot more but his facial expression didn’t connect with his love interest, Chichi

Upon seeing the video online, fans are of the opinions that Deji doesn’t really love Chichi.

See some reactions below;

Nawa…hope She’s not forcing thing..
The way he replies

My guy is not romantic