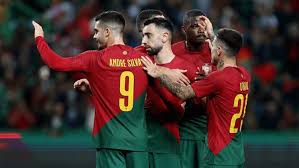 The Manchester United team appeared in excellent shape versus Nigeria as they got ready for their World Cup debut the following week.

In their final World Cup pre-tournament encounter, Portugal trounced Nigeria 4-0, led by two goals from Fernandes, one of which Dalot assisted.

After missing United’s previous two games before the break due to illness, Cristiano Ronaldo missed the match due to a stomach infection. This means that, by the time Portugal plays Ghana in their World Cup group opener on November 24, he will have missed two and a half weeks of action.

Against Nigeria, the team did not appear to be affected by his absence, as Fernandes scored on Dalot’s pull-back after only nine minutes. He increased the lead from the penalty spot after 35 minutes, and Matias Ramos and Joao Mario sealed the victory in the dying seconds.

The Reds duo received high acclaim from United supporters for their performance on Thursday night. Following were some viewers’ responses to Fernandes and Dalot’s performances.

Hot Post:  La Liga: Benzema misses a penalty as Barcelona overtakes Real Madrid at the top of the standings

Earlier this week, Benfica star Mario allayed rumors that Ronaldo and Fernandes were at odds over the former’s explosive interview with Piers Morgan and the latter’s awkward greeting with United. At the time the images were taken, I was in the locker room, Mario said.

They were making a joke about it. One of the last people to arrive was Bruno Fernandes. Did you arrive by boat, Cristiano enquired? Later, Fernandes himself posted a video from Mario’s press conference on Instagram with the caption, “Oh Joao Mario, there you are spoiling the covers of the newspapers.”

According to United insiders, Fernandes’ journey to Portugal had been delayed, which is why he appeared exhausted when he joined the team. They also disclosed that the majority of the United players believe Ronaldo would never return to Old Trafford.