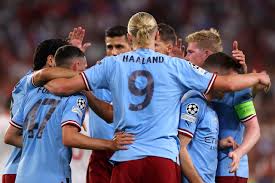 Although the season has gotten off to a strong start for Manchester City, there was a decline before the World Cup break.

After bursting out of the gates and defeating neighbors Manchester United 6-3, City had a fantastic start to the season and advanced to the Champions League knockout rounds. Erling Haaland, a recent acquisition, has been a revelation since coming on board and has already scored a remarkable 23 goals.

Although there is no reason to panic just yet, there was a definite decline in performance as the World Cup break drew near. Although the Blues performed admirably in terms of results after their setback to Liverpool, they occasionally battled against Brighton, and they needed a late goal to defeat Fulham.

Hot Post:  UEFA Champions League draw: Man City and Liverpool FC admits their opponents for the round of 16

The downward spiral came to a head in the final game before the break, when Guardiola’s team put on one of their worst performances in recent memory and were defeated by Brentford. It’s possible that those traveling to Qatar were affected by the upcoming World Cup inadvertently. Regardless, once the Premier League resumes, everything should be fine.

Hot Post:  Man City vs. Newcastle result, highlights & analysis: Sterling at the double as City go clear at the top

The loss to the Bees caused City to fall five points behind the pack’s leaders Arsenal, and while that deficit is by no means insurmountable, they now find themselves in a title fight with Newcastle United breathing down their necks.

However, City supporters are unconcerned at all about the caliber of the team. For the forthcoming January transfer window, MEN Sport polled readers to decide whether to sell or keep each player who has made an appearance for the first team. A player would appear in the positive column if more than 50% of voters thought they should remain, while less than that would cause them to appear in the negative column.

One player out of the 26 who have played at the senior level received less than 50% of the vote. Unexpectedly, Riyad Mahrez was that player. Despite a sluggish start to the current campaign, the winger ended the previous campaign as the top goal scorer with 22 goals, and he inked a new contract in the summer. 47.9% of his supporters think he should be kept.