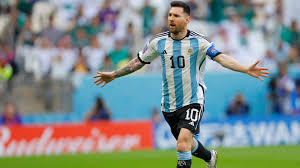 In the first ten minutes of Argentina’s 2022 World Cup match against Saudi Arabia, Lionel Messi scored to give Argentina a 1-0 lead.

At the Lusail Stadium, the Copa America champions were given an early penalty when a VAR review determined that Leandro Paredes had been fouled inside the area following a free-kick.

Harry Maguire made significantly less contact with a corner kick in England’s 6-2 victory over Iran, but in this case, the referee directed to the spot.

After some hesitation, Messi went up and calmly stroked the ball into the goal. The seven-time Ballon d’Or winner opened his account, and Salah Al Shehri was immediately sent in the completely wrong direction.

Messi, who is currently competing in his fifth and last World Cup, created history by becoming the only player from Argentina to score in four different tournaments.

Hot Post:  Lionel Messi breaks Pele's record for the most goals and assists ever as he surpasses yet another goals by Cristiano Ronaldo in a victory for PSG

The superstar of Paris Saint-Germain is Argentina’s talisman and everything revolves around him; Messi has been directly involved in 14 of La Albiceleste’s last 20 goals.

The team led by Lionel Scaloni has gone an absurd 36 games without a loss and is one of the favorites to win the championship match in Qatar.

Recall that despite worries about an ankle problem, LIONEL MESSI is determined to enjoy his final World Cup match with a grin on his face.

After confessing that he missed out on too much pleasure throughout his illustrious career, Argentina’s famous captain will make damn sure that his youthful teammates do the same.