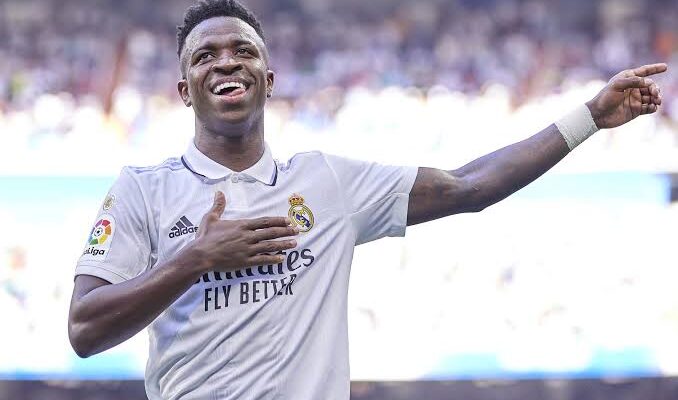 Vinicius Junior, a forward for Real Madrid, was subjected to racist taunts before and during Sunday’s Derbi Madrileno. Atletico Madrid has responded.

The Brazilian native was treated to monkey noises and racial screaming from a sizable portion of home supporters both outside the Wanda Metropolitano Stadium prior to the game and inside the stadium during play.

La Liga, the top division in Spain, has already acknowledged that an inquiry is ongoing, and On Tuesday, Atletico Madrid issued a statement condemning the vinicius-abusing fans.

Atletico de Madrid “roundly condemns the inadmissible slogans that a minority of fans made outside the stadium before the derby was staged,” according to a portion of the statement seen by SportsLeo. Racism is one of the worst ills in our society, and regrettably, clubs and the world of football are not immune.

A few people cannot tarnish the reputation of thousands and thousands of athletes who support their team with fervor and respect for the opposition, according to the statement. “Our club has always been characterized by being an open and inclusive space for fans of different nationalities, cultures, races, and social classes,” it said.

“We reject and are outraged by these slogans, and we will not let anyone to use our flag as cover to spout racist or xenophobic slurs. We at Atlético de Madrid have no tolerance for racism. We are fully committed to the fight against this social ill, and we won’t give up until it is eradicated.

Atletico then urged its supporters to act sanely and rationally; but, during the course of the following week, experts from various professions created a phony campaign, lighting the fuse of controversy without considering the effects of their actions and demonstrations.

“As a result, we have spoken with the authorities and offered them our full cooperation in the investigation into the events that took place outside the stadium. We also demand the identification of those responsible so that we can move forward with the immediate expulsion of those who are club members.

“We also wish to ask all football-related professions to engage in serious introspection. We believe that what has happened in the days preceding up to the derby is unacceptable, and we once again express our utmost condemnation of these activities, which have not the smallest basis.

In the weeks leading up to the derby, Vinicius received criticism from the Spanish media and Atletico Madrid players for his celebratory dancing after scoring a goal, though some remarks, like the one from agent Pedro Bravo telling the winger to “stop playing the monkey,” were deemed to have racist overtones.