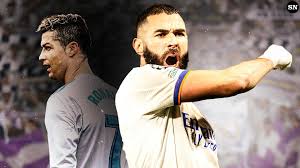 After winning the Ballon d’Or, Cristiano Ronaldo did not message Karim Benzema, according to Benzema.

After playing for Real Madrid last season and contributing to the team’s La Liga and Champions League victories, Benzema won the first Ballon d’Or of his illustrious career.

In 46 appearances across all competitions, he scored an incredible 44 goals, beating out Sadio Mane and Kevin De Bruyne for the prestigious individual award.

The 34-year-old was lauded by Zinedine Zidane, who referred to him as the “greatest striker in French football history.”

Ronaldo, Benzema’s former club teammate, has yet to offer his congratulations on his accomplishment.

When asked if the five-time Ballon d’Or winner had offered him any congratulations on capturing the honor, the France international said, “No, not yet.”

At Real Madrid, Benzema and Ronaldo had a successful nine-year, trophy-filled run as attack partners.

However, the Manchester United player has curiously not contacted his former teammate nearly a month after earning the Ballon d’Or title.

While France looks to defend their championship in Qatar, Benzema will now focus on the World Cup.

And the forward, who turns 35 the day after the World Cup final, claims that winning gold this winter will be one of his best birthday presents ever.

One of his nicest birthday presents ever would be if he were to win the World Cup, he remarked. “It will be a cup final for every game. We have a fantastic team of players, so we’ll focus on winning each game individually.

“I’ve experienced a few little fitness problems, but nothing major. Up until the 22nd, there is still plenty of time. I’ll be OK; I’ll be prepared psychologically and physically.”

He continued: “I’ll be coming back to Lyon to parade the Ballon d’Or.” “It’s incredible. Thanks to Lyon, my boyhood club, and my current club Real Madrid for supporting me in realizing my aspirations.

“They have always supported me, and I began climbing the ranks here, so this incredible occasion is quite touching for me. It’s my hometown and the team that enabled me to realize my dream of joining Real Madrid. It’s amazing to see everyone here and all the fans; it makes me very proud of the work I’ve done and I know they are, too.”