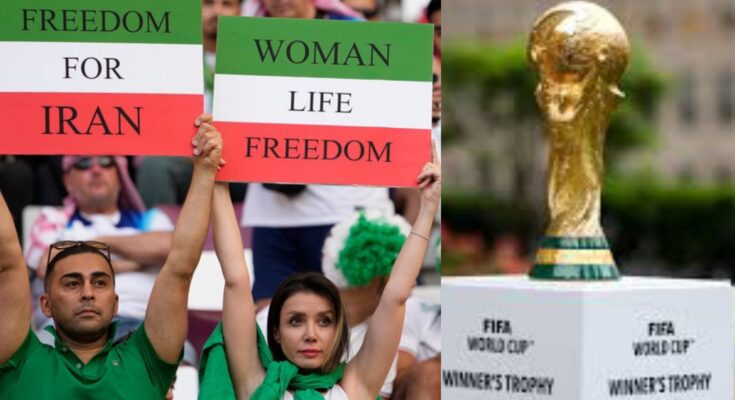 Prior to the England game, Iranian fans booed the national anthem.

The placards echoed the death of Mahsa Amini while in the care of the morality police and the brutal suppression of the protests that have since swept the nation in response. They bore the colors of the Iranian flag, with at least one rendered to appear drenched in blood.

The faces of young people killed in the protests, which may constitute the greatest danger to the Iranian regime since the Islamic Revolution of 1979, were displayed on a banner that one demonstrator at the football game in Qatar looked to be waving.

Since the protests began in September, more than 360 people have died, sparking calls from some Iranian athletes for the country to be disqualified from this year’s World Cup in protest of Tehran’s conduct.

The first member of the Iranian squad to publicly support the protests was captain Hajsafi, who said on Sunday that the protesters “should know that we are with them” and “sympathize with them regarding the realities” in Iran.

On Monday, some Iran supporters demonstrated.
Hours before their first game, England and Wales caved to Fifa and abandoned their plans to wear rainbow-colored OneLove armbands in support of the LGBT+ community out of concern that their captains Harry Kane and Gareth Bale might receive a booking.

With Doha’s discrimination against LGBT+ individuals and the deaths of migrant workers involved in building facilities for the event casting a lengthy shadow over the sport itself, the emphasis on the human cost of Qatar’s hosting of the tournament has only grown in recent weeks.

Zac Cox, a 40-year-old British man who died after falling 40 meters to his death while working on the building of the Khalifa Stadium, where Gareth Southgate’s team debuted their campaign on Monday, was one of many who unwittingly sacrificed their life for the competition.

Despite the FA’s earlier-in-the-day decision, BBC presenter Alex Scott was spotted on the sidelines with the OneLove armband, while at least one England supporter was spotted in the stands donning a T-shirt featuring the three.