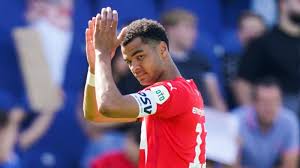 Ahead of the January transfer window, Arsenal is one among the teams expressing interest in PSV Eindhoven sensation Cody Gakpo.

Insider Graeme Bailey made this suggestion while discussing the Dutchman on the most recent Talking Transfers podcast.

In the summer, Gakpo came dangerously close to leaving the Dutch team when Leeds United and Southampton pushed for a last-minute agreement on the deadline.

But now that Louis van Gaal has convinced Gakpo to stay put until after the World Cup, one of Europe’s biggest names is expected to move to the Premier League.

Hot Post:  La Liga: Benzema misses a penalty as Barcelona overtakes Real Madrid at the top of the standings

As one of the clubs reportedly interested in bringing Gakpo to England is Manchester United, Bailey has shed some light on Mikel Arteta’s liking for Gakpo.

He stated, “I believe Cody Gakpo and [Manchester] United are the clear winners.” We are aware that Arsenal has recently shown an interest in him and has looked at him; why wouldn’t they? He has some incredible statistics right now, making him one of the best players in Europe.

Prior to the forthcoming transfer season, Arsenal has also been heavily connected with a possible deal for Mykhaylo Mudryk, but it feels like getting both would be a significant push for the winter market.

Both Gakpo and Mudryk play on the left wing and have had successful starts to the 2022–23 season. The Ukrainian has made 16 appearances and has eight goals and eight assists (via Transfermarkt).

Gakpo, though, stands out among the two after lighting up the Eredivisie with nine goals and twelve assists so far this season, in addition to another four goals and five assists in other tournaments (via Transfermarkt).

And as he gears himself to shine for the Netherlands in Qatar, we may have a chance to discover just how brilliant he is on Monday when the Oranje open their campaign against Senegal.

Whatever player Arsenal chooses, it seems like they might potentially strengthen their team at a time when it looks like they will mount a serious title challenge following the World Cup break.