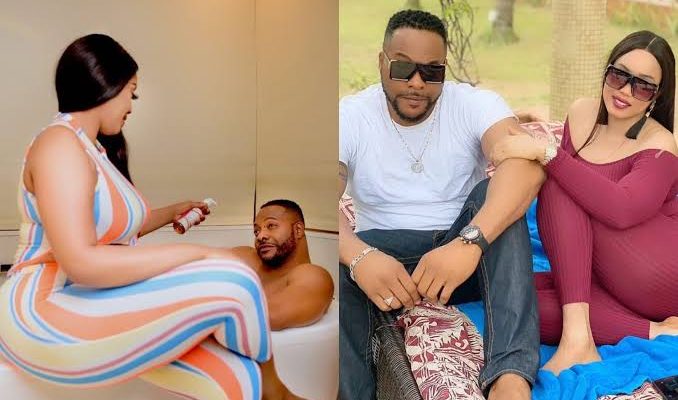 Actor Bolanle Ninalowo from Nollywood has spoken candidly about the reformation he underwent to win back his wife.

The actor’s marriage hasn’t always been smooth sailing because the couple faced challenges in order to maintain their union.

Bolanle discussed how his persistent infidelity and hedonistic lifestyle nearly destroyed his marriage in an interview with media personality Chude Jideonwo.

He said that his terrible way of life caused him to lose control over his wife as she grew beyond him.

He said that he had lost control over her and was unable to reach her to answer her calls.

He needed to start over and undo everything he had done in order to get his wife back.

I didn’t know anybody when I came to Nigeria. I had a bit of cash and you know with money, you will know people, you will get people to use you. So I said when I was in America I always wanted to do films. I had a dream of that, I was writing a script then. I said look, how about I produce this script? I had a bit of cash. So I made the film Rebirth and it was an epic failure. I was duped and a lot of things. But it was the beginning of my journey. It was the beginning of the success I am today. I say that the seeds of my success are buried in my failures. I did that, after a year or two of depression and losing money not knowing what to do, I still had a bit of cash and I said you know what? Another thing I like to do is music. So with music, I discovered a few talents and I became an executive.

Hot Post:  “Your Wife Is h0t, Her Backside Is huge” – Fans React as Ninalowo Bolanle Show off His Beautiful Wife and kids (Video).

Doing another thing I had no idea, no experience doing. And you know I’ve never been scared of that. I actually believe that hands-on experience is greater than being taught. I failed so many times in life to people but they didn’t realize I was only failing forward. So I did that, that failed. Then I did the music thing for about 4 years, spent all my money doing that till I had nothing again. We still haven’t blown, I haven’t made a dime from that. Then depression set in, family issues set in. My wife couldn’t understand me anymore. I wasn’t there for them as they needed me to be because one of the craziest things you could ever do is dating a dreamer. So that set in more depression, more problems, a lot of friends were gone. I had nothing left. Nobody. But then I went into solitude and solitude opens you up to grace. So solitude made me realize or discover who I needed to speak with.

Hot Post:  Itele Left The Group Chat – Reactions As Bolanle Ninalowo Says He Is Not An Irresponsible Father Like Others

It made me realize who was useless and who was useful for the situation I was in. Solitude made me realize that my dad and my mum were useless and made me realize that God was the only thing I needed that was useful. Because you know as human beings and as Nigerians, we are very dependent on our parents growing up. We are not trained to be leaders, we are trained to be followers. So every problem we have is daddy or mummy, those are the people. So then I picked up the Bible and started reading and I got so strong spiritually and in my belief of faith and God. At that point, I said you know what? It’s time for me to put God to the test and start again. So at some point when I just couldn’t go anymore and I had become strong spiritually, I said look it’s all over now. My wife I can’t even reach her anymore too because I’ve messed up everything. I said “if there’s no road in the front, you go back”.