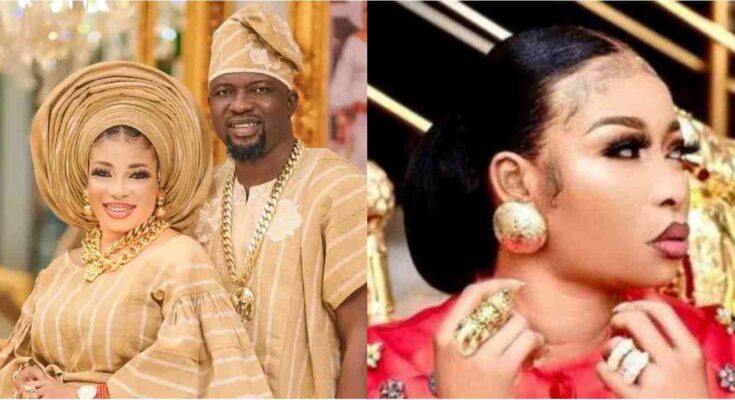 Elizabeth Aishat Anjorin, a NollyWood actress and film producer, has made it known to the world that Lateef Lawal, her husband, has never cheated on her since the two of them were united in matrimony.

However, Elizabeth Aishat Anjorin has spoken about her husband’s loyalty to her before, even before they were married.

You might find it interesting to know that Elizabeth Aishat Anjorin made this disclosure in reaction to a claim that her husband, Lateef Lawal, had been unfaithful to her, per dailypost.ng news.

The actress claimed in her declaration that she could swear with her life that her spouse had never cheated on her. She said that their marriage has never experienced a crisis and that her husband is more than faithful.

Hot Post:  “Bunch Of Talent But No Character & Self Control, Nor Go Get Belle O”- Reactions As Daniella Appreciates Khalid For Making Her A Woman (VIDEO)

Lateef is a good man at heart, according to Elizabeth Aishat Anjorin. Everyone has their own personalities, therefore he might have one. Lawal is obstinate and strong-willed. But it’s impossible that he would make fun of me by having affairs with other women “.

“He hasn’t cheated on me or had extramarital affairs since we were married, I can swear on my life,” Elizabeth Aishat Anjorin said.

Hot Post:  You are not a diplomatic person”- Alhaja Kaola tells Lizzy Anjorin

Well, I believe the actress should quit telling people about her marriage in public. It might be hazardous.