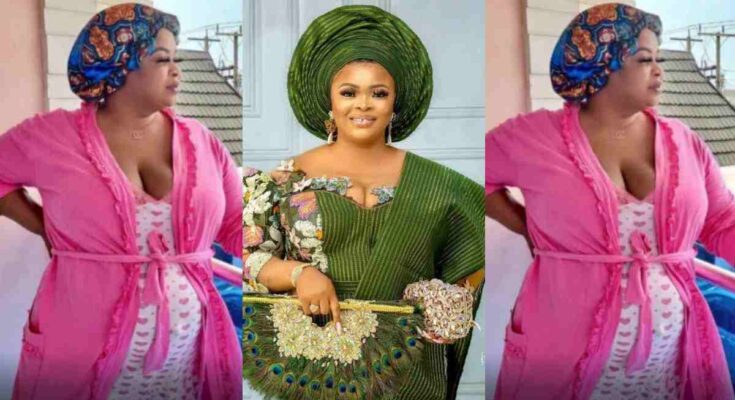 Nollywood actress Dayo Amusa delighted her followers by posting a beautiful snapshot of herself while pregnant on social media.

The stunning actress uploaded a picture to her Instagram account that clearly showed a bump. The actress claims that being pregnant brings with it mysterious delights.

Dayo Amusa introduced the character for which she had to be propped up as a pregnant woman for the film.

She wrote: When pregnancy 🤰 comes with unexplainable thrills…

Fans reacting to the post were thrilled about her role in the movie, as many commended her incredible acting skills.

Gossipinfo recalls that Dayo Amusa revealed why she stayed in an abusive relationship that almost ruined her life.

The actress, via her Instagram page, made this revelation in reaction to the death of gospel singer Osinachi Nwachukwu, who died from injuries inflicted by her husband.

“YOU CAN NOT FIX A BROKEN EGG

I used to be a fixer. I stayed in bad relationships, attracting the same type of men – men who needed to be fixed.
I know so many women in the same position. We attract cheating men, commitment-phobic men, emotionally unavailable men, emotionally damaged men, alcoholics, drug abusers, narcissists and sociopaths.

It seems as though males with scattered pieces are drawn to us like a magnet. And for some reason, we’re motivated to reassemble these parts.

But I have to acknowledge that I have failed each and every time.

I never allowed myself to pause and consider my motivations. I didn’t stop to consider why I felt compelled to pick up everyone else’s broken pieces all the time; I just hurried to do it.
I thought that because I was putting someone else’s worth before my own, finishing in second didn’t matter because I was being selfless. Finally, rank shouldn’t really matter, right?

I understood that I was attracted to these kinds of men because I thought I could save them.

We trust that we can get rid of the emotional baggage that he has been carrying for years.
We attract these men because we believe they need us.
And to leave them would be selfish, insensitive and ruthless.

The sad news is, we constantly blame ourselves when they don’t change. Every time they fail us, we think it’s because we failed them.
Their hold on us becomes stronger; they keep us around knowing they have nothing to offer.
It’s just my view.

*** If that relationship or marriage is TOXIC! PLS MOVE!!!”