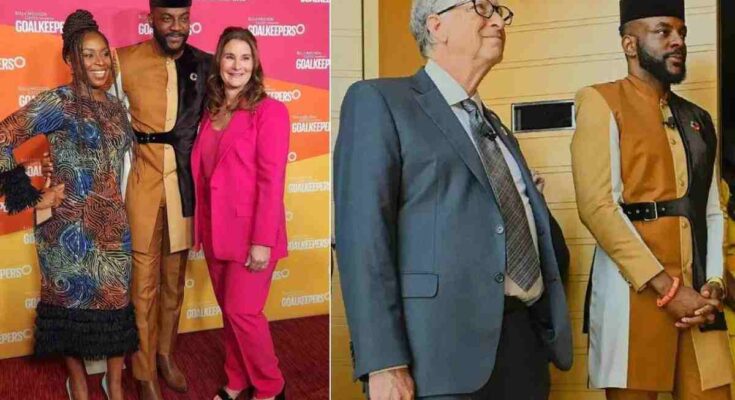 The internet community has praised Ebuka Uchendu, an award-winning media personality, for his numerous victories and ongoing professional success.

Since going on the reality show’s open call, the Big Brother Naija TV host’s career has taken off.

As he posted pictures with one of the best ken in the world, Ebuka dominated social media.

Bill Gates, one of the richest men in the world, and his ex-wife, Melinda Gates, were there when Ebuka met them.

Hot Post:  “I was scared of ruining people’s childhood memories”-Stan Nze opens up

The Bill and Melinda Gates Foundation presented the Goalkeepers 2030, and the excellent host served as its anchor.

Ebuka Uchendu was undoubtedly star struck when he met the well-known couple, as evidenced by the pictures he posted online.

The photos has since won him the admiration of many for his resilience, dedication and hardwork.

Hot Post:  Lady claiming to be the one caught in the room with BBNAija’s Emmanuel in Dubai breaks silence.

Ify Ella wrote, “It’s the humble pose beside bill gates for me

Sleek Wunmi wrote, “This man is doing great things, he is so blessed! Wow

Chiamaka Peppy wrote, “In this life the people you roll with can make or mare you, there’s nothing like having the right connection and being in the right circle. His alliance auth Chimamanda Adichie hasn’t favored him in so many ways

Pepintern wrote, “It’s common knowledge that Ebuka is the most successful Big Brother franchise ex housemate. His grace is just on another level”.