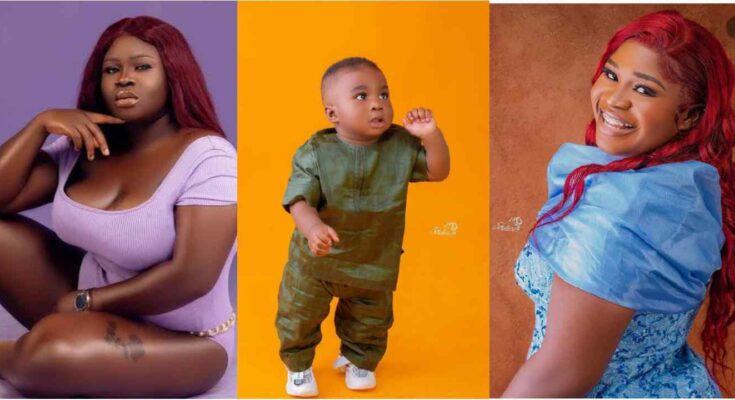 On September 23, Oyedeji Olaide, a Nollywood actress and filmmaker living in Germany, celebrated the birthday of her adorable son. The actress celebrated her son’s birthday by posting a beautiful photo of him on her Instagram page. Happy birthday to him, and Godspeed as you enter a new decade.

She wrote, “Sharing the gorgeous photo of the celebrant, “Okomi, happy birthday. To say that we love you would be an understatement because words cannot express our feelings for you. Your birthday won’t be your final one on earth if you continue to gain knowledge and power from God “.

A few years ago, Olaide Oyedeji moved to Germany. She is an excellent actor who excels in acting and character interpretation. She gained fame for her performance in the film “Ayomide,” which she also produced. Her fans adore her for the action and vitality she brings to the majority of the movies in which she appears. She is blissfully wed to her charming husband, movie producer Olukotan.

kemity, Olayinka Solomon, and her charming admirers have all given him birthday greetings.

Gossipinfo Recalled That Oyedeji Olaide, a well-known actress from Germany who is presently on holiday with her husband and two stunning daughters in Nigeria, posted a little video with her daughters on social media. In the video, they could see people having fun together while dancing and singing.

The Nigerian actress Oyedeji Olaide, who goes by the screen name Darasen, is well known for playing characters such as the Ghetto babe, Area babe, Housemaid, Romantic, and Villager, among other roles. Some time ago, she and her charming husband Olukotan moved. He performs in Nollywood as well. Olaide is a producer, a wife, a mother, a director, a businesswoman, and a brand influencer. Over the past ten years, she has been quite engaged in the care industry. She has been in a number of Yoruba films. She has worked as a producer on a variety of films, including Ayomide, Darasen, and others. The actress has shared the screen with a number of well-known stars.

Hot Post:  Chacha Eke is a ‘fierce queen’ as she celebrates 35th birthday with a new beginning, days after calling for help (Photos)