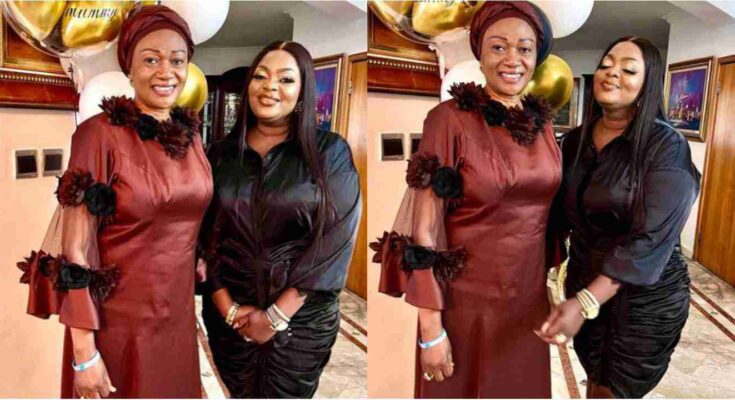 Eniola Badmus, a Nollywood actress, screenwriter, performer, and social media influencer, posted a gorgeous photo of herself with Senator Oluremi, Bola Tinubu’s wife, as they celebrated the senator’s 62nd birthday, just an hour ago on her verified Instagram profile. The celebrant was seen wearing a brown attire, while Eniola Badmus wore a black outfit that was wonderfully tailored for her.

Hot Post:  “Am unbothered”- Eniola Badmus reacted to the backlash from critics who attacked her for endorsing Tinubu

After sharing the photos she backed it up with a lovely caption that reads, “Still your day mummy do have a fabulous day ma. “

After the actress was spotted posing with Senator Oluremi in fresh Instagram images, as was to be expected, fans and other followers of Eniola Badmus flooded the comment section to offer their various thoughts.

Hot Post:  “I love you” – Lucky Oparah says as he shares loved-up video with Eucharia Anunobi amid dating rumours (VIDEO)

Gossipinfo Recalled That Eniola Badmus, a prominent actress in Nollywood, has pleaded for space from her many fans who are swarming her.

The stunning actress requested her followers to shoot their photographs, or to make their intentions known, rather than packing her social media and magnifying her pictures, as she had just celebrated her new age in style.

Eniola Badmus claimed the photo zooming gives her physical discomfort while attempting to be amusing about it.