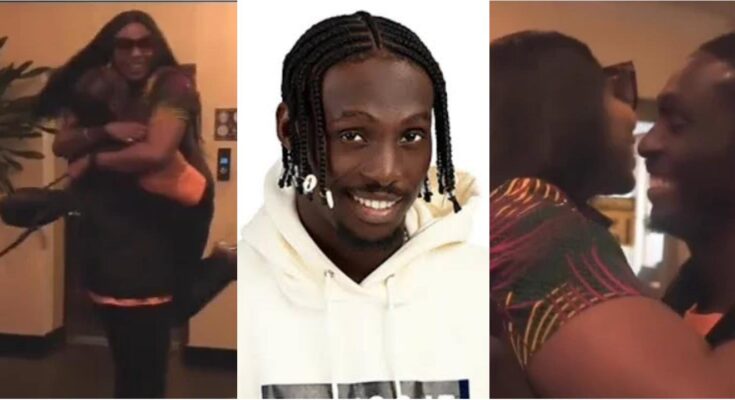 Eloswag, a well-known BBN star, recently reconnected with his mother after being booted off the BBN show. Eloswag posted pictures of his mum and him cuddling on his official social media account.

His mother showed up at his hotel in a G-wagon in a video and waited for him to arrive at the reception.

Hot Post:  Reaction As New photo of Olu Jacobs Surface Online ahead of his 80th birthday

When Eloswag first saw his mother, he gave her a big hug and carried her while turning her around. They both demonstrated beautiful dance techniques as well as a cheek kiss.

It was a lovely sight to witness as they worked toward family objectives. The praise for them from fans was overwhelming.

recalled that his young mother, whose face appeared online for the first time a few weeks ago when he was still in the BBN show, ran a campaign for him. They gushed over her, and Fan marvelled at his mother’s beauty and physique.

Hot Post:  "We have Level Up" Fans React to Eloswag and Chomzy Shouting We have level Up.

Eloswag’s caption reads, “A mother is one of the greatest gifts of life. She’s a backbone and a support system”.