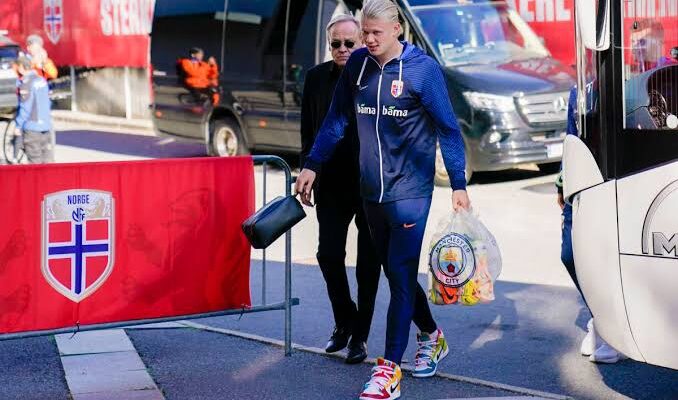 A member of Manchester City’s medical staff has accompanied Erling Haaland on international duty for Norway.

It’s reasonable to argue that Erling Haaland’s performances at Manchester City are the exact definition of lighting things on fire.

The Norwegian striker has fought off concerns about how well he will adjust to the Premier League after playing in the Bundesliga.

The Sky Blues’ new number nine has scored an incredible 11 goals in his first seven league games of the season.

In the sixth game against Aston Villa, the 22-year-old scored his tenth goal for Pep Guardiola’s team to become the joint-fastest player in the division’s history to reach double digits.

He also set a Premier League record for fastest player to achieve his second treble by following up his amazing hat-trick against Crystal Palace with another against Nottingham Forest in the very next match.

Many people are sure that Erling Haaland would easily beat Mohamed Salah’s all-time record of 32 goals in a single 38-game season, breaking barrier after barrier in English football.

The kid made City history by scoring a brace on his debut in the Champions League as well.

The former Borussia Dortmund forward also scored a magnificent acrobatic winner against his previous club in his second encounter in Europe for the Sky Blues, bringing his season total of goals to a respectable 14 in a total of eight games.

With the former RB Salzburg player now serving as the Premier League champions’ star player, it has become clear what steps he is taking to keep himself healthy and productive.

According to the most recent information given by commentator and close family friend of the Haalands, Jan Aage Fjortoft, the striking sensation has suggested adding Mario Pafundi, a member of Manchester City’s medical staff, to Norway’s medical team during the current international break; the manager Staale Solbakken has given his approval to the move.

According to additional information, Pafundi’s responsibility is to make sure Erling Haaland adheres to the regimen he has up till now followed at the Etihad Stadium.

Additionally, the club has been closely monitoring the physical development of its summer blockbuster signing and believes Mario Pafundi’s presence will allow him to maintain his fitness.

Hot Post:  Jules Koundé's registration is given green-light, about to be finalized soon - Report

Furthermore, according to club sources, Pep Guardiola’s team is eager to keep up a relationship with the Norwegian national team and is happy to share the strategies that have helped the goalscorer find success so quickly in England.

It is important to remember that Haaland’s injury history was a big concern in Germany and a major topic of conversation when he joined City.

It will come down to focusing on the little things to make sure he stays healthy and productive for Manchester City for years to come because both the player and the team are concerned with maintaining their success.

For the remainder of this month, Norway has two Nations League matches scheduled, with Haaland due to play against Slovenia and Serbia.