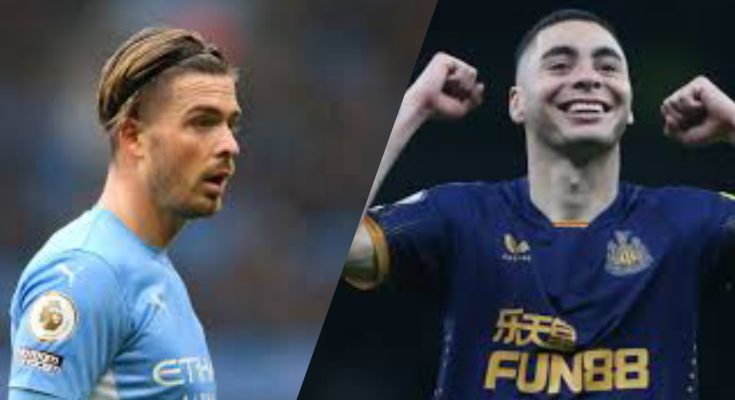 The 27-year-old former captain of Aston Villa, who cost £100 million to sign with Pep Guardiola’s team in the summer of 2021, compared Riyad Mahrez’s final-day effort to that of Almiron.

During the title celebrations that followed their 3-2 victory over his previous team, Grealish said on an Instagram live during the following: “Riyad, get rid of him as soon as you can. He had Almiron-like play.”

Despite a rocky start in the Premier League, Paraguayan international Almiron scored against Southampton on November 6 for his seventh goal in as many domestic matches and eighth overall for the season.

Grealish’s recent dig has not gone unnoticed, but he has only managed seven goals in 53 games since going to the Etihad.

The fourth said, “Grealish must be sobbing. Almiron did him a favor.

One of the most active players in Europe is Miguel Almiron.
Before the team’s trip to Southampton, where Newcastle won 4-1 with goals from Chris Wood, Joe Willock, and Bruno Guimaraes, Newcastle manager Eddie Howe questioned Almiron about his response to Grealish’s remarks from earlier in the year.

“I think Miggy’s motivations are far deeper and stronger than that,” he declared.