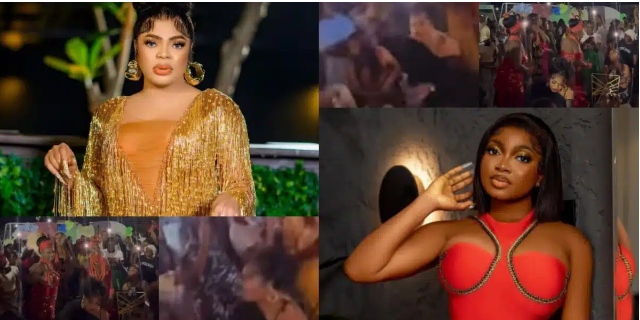 Popular transman Bobrisky appears to have stuck to his promise to lash out against socialite Papaya Ex.

The two rivals almost got into a brawl when they were recently seen together at an event.

In the viral video, Bobrisky could be seen sitting on one side of the action as Papaya Ex stood behind him.

The brand influencer and her crew were seen tossing Bobrisky some stunning shade while he maintained his composure.

However, the crossdresser didn’t keep it up for long before hurling his table water at her.

Hot Post:  "Why Is There Hair In Your Chest Senior Man" – Mixed reactions as Bobrisky’s no filter photos emerge online

Fortunately for Papaya, the bottle missed her.

In another video, Bobrisky, who was attempting to maintain his composure at the occasion, could be seen receiving a mocking dance move from Papaya.

The crossdresser was so furious that he warned people to stop recording him.

It all started when Papaya Ex threw a shade at Bob over her upcoming housewarming party.

The content creator had rolled out invites for her grand party.

The content creator had a similar invite pattern with Bobrisky. Accompanying the invitation card, she gave her guests a bottle of champagne, glass cup and more.

Recall that in 2021, Bobrisky had given out an invitation package containing a bottle of champagne, perfume and more.

Noting the similarities between the two, Bobrisky took to his social media page to shade the socialite.

He pointed out how she was copying his method and mocked her dress, which he compared to LAWMA outfit.

Bragging, Bobrisky stated that he leads while others follow.

He cautioned her to stop struggling as he is already bigger than her.

Bobrisky opens up on his beef with Papaya
Speaking on his beef with her, the crossdresser revealed that Papaya imitates his style, steals his brands, and patronizes the same vendors as his.

According to Bob of Lagos, Papaya copied all his styles while proving to be bigger than him in the influencing game and in terms of beauty.

He further threatened to beat up the influencer while encouraging her to maintain the same energy when they meet in person.