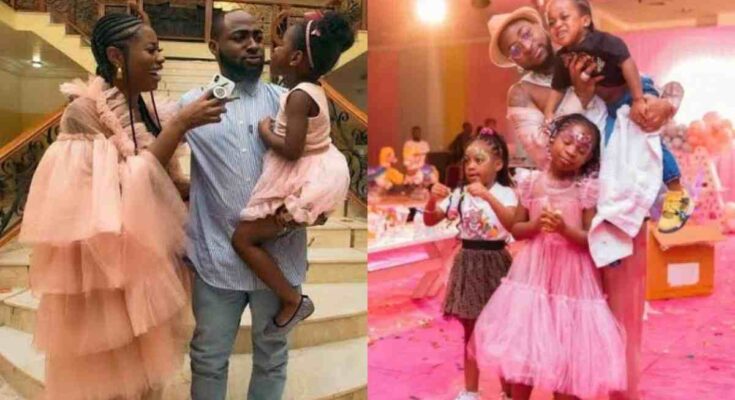 Sophia Momodu, the mother of singer Davido’s daughter Imade, has drawn criticism over Imade’s birthday message to the musician.

According to Gossipinfo news, Imade wrote a little note to commemorate his 30th birthday on November 21st, 2022.

First-born child of the singer also paid respect to Ifeanyi Adeleke, who passed away.

She posted a picture of him carrying Ifeanyi while holding onto his daughters as a sign of respect for the deceased child.

Many thought it was sheer wickedness on Sophia Momodu’s part to post a picture of Ifeanyi, who she never acknowledged when he was alive.

Sophia Momodu always shared photos of his second daughter, Hailey and is even bff with her mother.

But it wasn’t the same with Ifeanyi, as she never acknowledged him on her page or her daughter’s page.

A look through Imade’s Instagram page shows that there are lots of photos of Hailey but no single photo of Ifeanyi.

One Dafe wrote, “Normally them suppose wipe the person when they run Imade page cord for neck

One Ene wrote, “Funny how Sophia never thought to feature Ifeanyi on Imade’s page his demise. How insensitive!

One the cutest skimmy wrote, “Of all the pictures Imade has with her dad, Sophia choose this one?? Hum I’m starting to see what people they say about her. All shades of wrong, wickedness abeg

One D strategist wrote, “What Sophia did was sooo wrong Damn! What a shade!

One Khaleedah Dollars wrote, “One of the reasons why I don’t like Sophia. Imade and Davido have hundreds of pictures together but she chose to post this one

One Larry King wrote, “Did you hate? Someone you have never posted even on Imade’s page not even on his birthday after his death suddenly gets worthy of your post. #witchcraft in display

Omalicha Oma wrote, “Sophia this is not Father’s Day, you can’t tell me you don’t have his personal picture or one with Imade to post, allow them heal baby, May be you meant no harm but this is quite insensitive

Hot Post:  "I Did It Again" Mercy Aigbe's Daughter, Michelle Aigbe Says As She Shares New Photos On Instagram

One Purity Goldie wrote, “So out of all the pictures Imade and her father have together Sophia decided to post this one?? For someone that’s recovering? What manner stupidity is this?? I’m not even Davido but I know the emotions I got from this picture

One Mabel wrote, “Papa attended Imade’s birthday, she made sure she didn’t make a mistake of posting him, in all the million picture she posted she never posted the boy, on papa’s birthday she went somewhere else with her daughter and was busy uploading pictures for everyone to notice her, evil girl”.