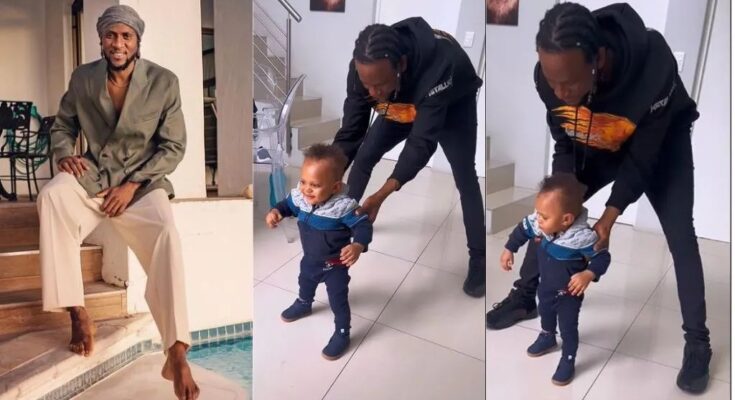 Omashola Kola Oburoh, a former housemate on BBNaija 2019, and his son Eyitemi were featured in a sweet video that just appeared online and, as a result, received a flood of positive feedback from internet users.

Omashola, who proposed to his fiancée on December 31, 2021, had admitted that he had first questioned his capacity to impregnate a woman.

Hot Post:  “I was dealing with some deep issues” – Omashola finally speak out following his ‘viral’ video (Video)

In the video shared on Omashola’s official Instagram page, he was seen giving his 10 month-old child an encouraging countenance on the need to learn how to work as he grows up.

This comes few months after Omashola bought a plot of land for his son, Eyitemi Daniel Oburoh and further disclosed that he wants him to be a professional football player who is going to have Forbes level girlfriend.

Hot Post:  Don’t judge me too much, venerability is not weakness – Annie Idibia says as she reveals she and Tuface have renewed their vows

Sharing the video of himself and his wife teaching their son how to start walking, Omashola wrote; “Every step you take give me joy @life_of_eyitemi . . #prouddad.”

moniesebusi: The big man doesn’t want to walk, he wants to run. Beautiful moments right there.

ebubejudithozehjudith: This is so beautiful

Hot Post:  “If you no get money, stay in your house” – Omashola gets @ngry, threatens to d!sgrace [email protected] celebrity ballers who drinks in his club without paying (Video)