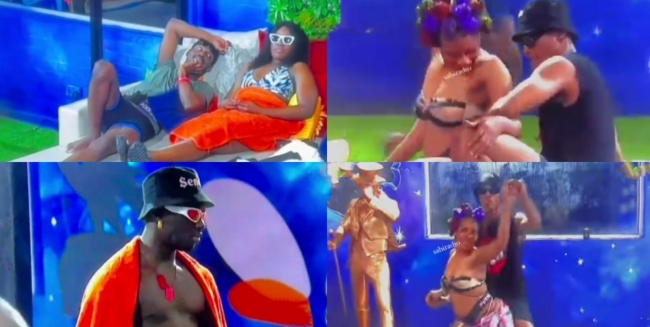 BBNaija Viewers were shocked when housemate Adekunle revealed during a talk with Bryann at a pool party that Groovy had sex with his love interest Phyna in the bathroom.

Last night’s Pool Party hosted by the Housemate was jam-packed with energy. The Housemates sipped drinks and munched on appetizers as the party got underway gradually. However, they quickly made the decision to turn up loudly and bring down Biggie’s House.

Remember when Phyna and Groovy supposedly had private conversations there?

When he was photographed conversing with Bryann while seated next to Daniella at the party last night, Adekunle added fuel to the speculation about what he saw in the restroom.

Hot Post:  “May our kiss not be rejected” BBnaia Fans Have Reacted To A Video Where Deji Curved Chi Chi’s Kiss

Adekunle told Bryann he caught Groovy and Phyna making love in the toilet and directed him to confirm his assertion.

“Phyna and Groovy are having s**x in the toilet”

Bryann walked away from the conversation to avoid any controversy.

After the party, the two got into a heated argument, with one party hurling insults at the other and so on. Their disagreement persisted after the party. the involvement of other residents to mediate disputes

In the HoH room, Phyna and Groovy had a discussion and reconciled their issues. They sealed it with a kiss to show how much they cared for one another. Viewers were happy to see Phyna and Groovy share a kiss after their minor disagreement because it was a nice moment for them.

Hot Post:  ‘Watching you grow up has been such a joy’ Comedian AY showers lover on her first daughter as she celebrates her 14th birthday