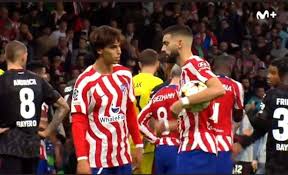 This season, Atletico Madrid is not playing in Europe. They were eliminated from the Champions League, and because they placed last in their group, they were also excluded from the Europa League.

The failure will have an impact on the club’s finances because Atletico expected to get more funding. They might be compelled to sell some of their stars as a result.

Hot Post:  EPL: Cesc Fabregas reveal the conversation he had with Queen Elizabeth regarding Arsenal

According to reports, Joao Felix would be the first to depart. He is not at ease, his relationship with Simeone is not at its best, and Manchester United may try to convince him to transfer to Old Trafford.

The Sun reports that in addition to Joao Felix, three other players may go in January. Thomas Lemar, Yannick Carrasco, and Rodrigo de Paul are mentioned in the newspaper.

According to “L’Equipe,” Lemar was offered to Arsenal and Everton last summer. Both parties agreed to the deal right away, but according to “The Sun,” they could potentially pursue the Frenchman once more.

Like Joao Felix and Lemar, Yannick Carrasco would have a decent chance to leave and find a spot in the Premier League. The Sun’s opinion is that he might sign for Tottenham due to his style of play.

De Paul comes last. His visit in the middle of the season was not warmly received by the team at all. He should have been in Argentina, yet he was photographed in Miami at an awards ceremony. His membership in the club may have been lost due to that and his elimination from Europe. They think that the two more than intriguing choices for the Argentina international are Liverpool and Arsenal.