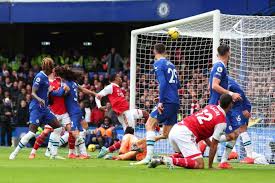 Gabriel Magalhaes, a defender for Arsenal, retaliated against Pierre-Emerick Aubameyang.

In the wake of Sunday’s victory against Chelsea for Arsenal, Gabriel Magalhaes retaliated against his former captain Pierre-Emerick Aubameyang. On his first outing since his contentious departure against the Gunners, Aubameyang had a forgettable afternoon.

After the contest, Gabriel added salt to the wounds. Nothing Personal. LONDON IS RED, the Brazilian wrote in a tweet.

Hot Post:  Aubameyang Sends Message To Arsenal Ahead Of The London Derby Game Between Chelsea And Arsenal - Report

At the top of the standings going into the weekend, Arsenal was two points ahead of the reigning champions Manchester City. The team led by Mikel Arteta is aware that winning their next two games before the World Cup will guarantee that they are in first place at Christmas.

The previous two seasons, Arteta has guided his squad to back-to-back victories at Stamford Bridge. Under Graham Potter, the Blues have not yet had a home loss.

Agbonlahor acknowledges he is unsure about the outcome of the match and believes any team might win. Whatever the result, he thinks it will be a fantastic indication of how far Arsenal has actually come.